President Obama’s staff deliberately kept him in the dark about an impending report on the Internal Revenue Service scandal, his press secretary said Monday. 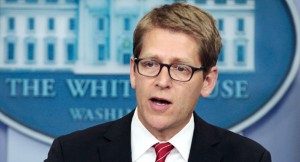 White House press secretary Jay Carney said during his daily briefing with reporters White House counsel Kathryn Ruemmler had been notified a Treasury Department inspector general’s audit report was on the way but decided it “wouldn’t be appropriate” to tell the president.

Carney said Chief of Staff Dennis McDonough and other top officials were told the general nature of the report but a “judgment” call was made not to tell Obama it would show the IRS had targeted conservative groups for extra tax scrutiny.

Carney said Ruemmler “made clear that it was her view, and others shared this view, that there was not a need, in a situation like this with an ongoing investigation or audit, that the president should be notified.”

Carney pointed out the report found no evidence anyone outside the IRS had any involvement in the inappropriate targeting, no one at the White House “intervened in an ongoing, independent investigation or did anything that could be seen as intervening in that investigation,” and the misconduct had stopped in May 2012.

“While we had an indication of the likely findings, until the IG finalizes his report, the findings and conclusions are subject to change,” Carney said. “And in fact, many IG reports do change significantly before they are published.

“So to be clear, we knew the subject of the investigation and we knew the nature of some of the potential findings, but we didn’t have a copy of the draft report; we did not know the details, the scope or the motivation surrounding the misconduct; and we did not know who was responsible. Most importantly, the report was not final and still very much subject to change.

“I just want to say that some reporting today suggests — and this is I think worth noting — suggests that given awareness of the potential findings, we should have done more. That could not be further from the right course of action. The cardinal rule, as I said, is that you do not intervene in an independent investigation, and you do not do anything that would be — that would give such an appearance, particularly when the final conclusions — as was the case here — have not been reached. And that’s the doctrine we followed.

“And the bottom line is — and this isn’t just the most important fact, it’s what we have said from the beginning — not the White House, nor Treasury intervened in the Inspector General’s audit.”

Asked why Obama couldn’t have been informed of the coming report without interfering, Carney said “because it’s a judgment, in this case the judgment of the White House counsel, that this is not a matter that you should — or that she should convey to the president.”

(CNSNews.com) – Setting aside a long-held U.S. policy, President Obama -- when hosting the president of Burma in the Oval...