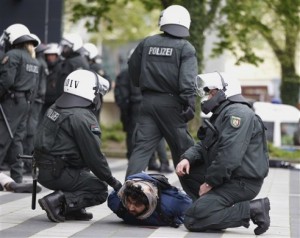 The leader of the Muslim Public Affairs (MPACUK), Asghar Bukhari, when interviewed by the BBC, placed the entire blame for the murder in Woolwich on the West. He didn’t have a single word to say about totalitarian Islamism and certainly not about jihad in Islam itself or in the Koran. No. The khafir, as always, is entirely to blame. And Muslims, as always, are only passive victims. But there’s nothing new here.

What is the government likely to do apart from condemn the violence and deny the link between our own foreign policy and domestic acts of violence by some of Britain’s Muslims? Nothing whatsoever. Despite the Muslim Public Affairs Committee’s efforts, the depressingly predictable and familiar cycle of violence is likely to continue until the government accepts the real link between the two. Only then will any solution be within reach. — MPACUK, 23.5.2013

Even when Muhammad, and later Muslim leaders, invaded all the surrounding empires and countries, they said it was all a matter of defense. The Muslim imperialist empires conquered a third of the world defensively. After all, as the saying goes, “The best form of defense is attack.”

So Muslims rationalise their endless acts of aggression and war in terms of defense and their being attacked by infidels. That’s also the language of the Koran. The gimmick of defense was also used by Adolf Hitler when he first invaded the Sudetenland, then the rest of Czechoslovakia, then Poland. All these countries were said to be either a threat to Germany or had supposedly already attacked it.

Asghar Bukhari specifically singles out Afghanistan and Iraq. Nonetheless, Western troops no longer ‘occupy’ Iraq. This country now has a Shia Muslim government. That’s unless MPACUK is condoning retrospective retribution or revenge for what Western troops did in Iraq.

As for Afghanistan, there are 66,000 U.S. troops in that country. Despite that, there are vast swathes of the country in which there are no Western soldiers at all. Of course 66,000 soldiers can still do much damage; but it still can’t be called an ‘occupation’ (a buzzword from both the Left and from Muslims).

MPACUK has also conveniently forgotten why we went into Afghanistan in the first place — because of 9/11 and the numerous terrorist bases that litter that country and the Pakistani borders with Afghanistan. If we hadn’t gone in, the Taliban would probably rule the entire country today. May be this is what’s truly behind the Islamists of MPACUK — they didn’t mind the prospect of complete Taliban rule in Afghanistan (just as the Islamist leaders of Pakistan wanted, and still want, the Taliban to rule there).

Let’s stop the BS. It’s not ‘all about Afghanistan and Iraq.’ 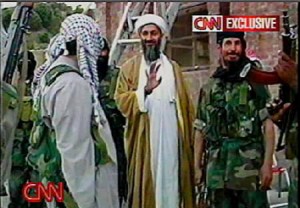 Take Osama bin Laden. He was mainly motivated by the presence of U.S. personnel in Saudi Arabia (certainly not ‘occupiers’); not by Afghanistan, Iraq or even Palestine. Take another example. Three pre-Afghanistan and pre-Iraq bombings were carried out by Muslim group in 1977 in Washington. These bombings were a response to the showing of a ‘blasphemous’ film about the prophet Mohammed.

And what about all the Islamic acts of violence and terrorism that aren’t anything to do with Iraq, Afghanistan, or any ‘occupations’? What about the bombing of Charlie Hebdo‘s offices in Paris? The fatwa on Salman Rushdie? The riots and deaths because of the Muhammad cartoons and the film ‘Innocence of Muslims’? The killing of Pim Fortuyn and Theo van Gogh? The Egyptian Muslim Brotherhood started its own bombing, assassination, and killing campaign in the 1920s. Islamic terrorism continued up to the 1960s and beyond. The list is endless.

MPACUK’s focus on Afghanistan is disingenuous in the extreme.

Islamists will always rationalize jihad in terms of defence. This has happened throughout those 1,350 years of jihad. Islamist bombings will still occur even if we pulled out of Afghanistan. And what about MPACUK’s other rationalisation of jihad and its real monomania — Israel?

It doesn’t matter about ‘foreign interventions’: many Muslims kill people simply because they are ‘unbelievers’. The deaths and persecutions in the Muslim world are largely carried out by minds oblivious to any Western interventions; they are about jihad and sharia law — about Islam. The Islamic jihad reached its peak when the Islamic world was the great power; not when it was ‘oppressed’ by the West.

MPACUK calls on Muslims to get a little extreme; no we call on Muslims to get very extreme. The time for moderation is over, the time for passive acceptance is gone, no longer are we held back by empty platitudes of ‘serving the community’. Muslims need to get active and get vocal now…. – MPACUK, 2010

MAPCUK also calls for more ‘democratic activity’ from Muslims. However, democratic activity only when it comes to Islamic issues and the situation of Muslims in the world. MPACUK is utterly communalist/sectarian in nature — as its name suggests. Everything it says is said through either the prism of Islam or the situation of Muslims either in the UK or abroad. In fact it’s hardly worth stressing ‘democratic involvement’ at all if that involvement is completely determined by Islam and the affairs of Muslims as Muslims. MPACUK may as well agitate for full sharia law — it would have the same results.

Despite all that, MPACUK has also spoken out against democratic activity; though it hasn’t spoken out against political activity. It has called for Muslims ‘to get more extreme’ and much else. It is taking, in fact, the Muslim Brotherhood approach of using democracy and democratic means to further the cause of Islam and Muslims — ultimately, to bring about sharia law and Muslim self-rule. All this, again, partly through the means of British democratic processes.

MPACUK is not against Islamic terrorism. It rationalises, justifies, and explains it. Nonetheless, like the Egyptian Muslim Brotherhood, it also believes that by using Western (non-Islamic) democratic processes, it can further both Islam and the cause of Muslims. That is, MPACUK essentially uses democracy in order to destroy democracy. That’s why it prefers ‘democratic involvement’ to what it sees as often counterproductive examples of Islamic terrorism.

Congress’s dance with the debt limit can be confusing and, frankly, the details can be a real snooze fest for...