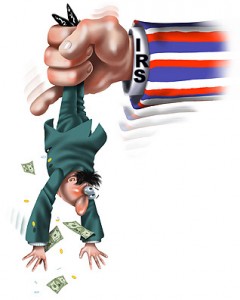 related to the IRS scandal in order to prepare their bosses for what will inevitably be a frantic month of June involving multiple simultaneous investigations into government wrongdoing. By the time lawmakers return to session next week, at least four different investigations will be underway.

The IRS’ shenanigans, chronicled in a damning report by Treasury Inspector General J. Russell George, started when a “team of [IRS] specialists” came together in April 2010 to process the tax-exempt nonprofit status of conservative groups that might be “potential political operations” (page 13 of the IG report). The IRS added “additional specialists” to this effort in December 2011.

So for those of you keeping score at home

(this reporter is still waiting for Ken Starr to send in his bracket picks) The Daily Caller presents a list of some of our favorite investigations into potential IRS wrongdoing. Which one will come up with the “Alexander Butterfield” quote?

As head of the House

Ways and Means Oversight Subcommittee, Republican Louisiana Rep. Charles Boustany has conducted the toughest probe into the IRS scandal so far. Boustany managed to acquire “all communications containing the word ‘tea party,’ ‘patriot,’ or ‘conservative,’” from recently-resigned IRS acting director Steven T. Miller. He also got the names of everyone involved with the improper targeting.

Republican Ways and Means chairman Rep. Dave Camp of Michigan also raised awareness of the issue by reaching out to the public, asking Americans to write in with their own stories of IRS harassment.

“Your story is critical to moving the investigation forward,” according to a form created on the Ways and Means’ Committee’s website asking for users’ stories, which also includes a two-year timeline of the scandal beginning in August 2010.

Boustany was in prime position to jump on the IRS scandal. Back in September, long before the current scandal, his subcommittee grilled Steven T. Miller with concerns about the IRS’ implementation of Obamacare.

Respected Republican Oversight chairman Rep. Darrell Issa of California recently smacked down Republican South Carolina Sen. Lindsey Graham’s call for the appointment of a special prosecutor into the IRS scandal, declaring, “When I can’t do my job because I lack the authority or cooperation, I’ll seek additional remedies.”

Issa has been competitive about investigating the IRS scandal. He has said that he is working on the IRS scandal full-time, and he refuses to dismiss the possibility of Treasury Department or even White House involvement.

As the scandal works its way up from the Steven T. Millers of the world, watch for Issa to take the investigative lead.

Committee chairman Max Baucus is leading that committee’s investigation into the improper targeting. Baucus called the IRS’ conduct “intolerable” and “a clear breach of the public’s trust” and demanded a full investigation, and in so doing he has become the most visible leader of the investigation to the mainstream media.

Unfortunately, Baucus has substantial baggage. As The Daily Caller reported, Baucus sent a letter to then-IRS commissioner Donald Shulman in September 2010 urging the IRS to scrutinize the tax-exempt status of nonprofit conservative groups like Americans For Job Security

New IRS commissioner Danny Werfel has pledged to conduct a full investigation into the IRS scandal “to make sure it doesn’t happen again.”

Werfel, who was described as the Obama administration’s “point man” on sequestration prior to taking over the IRS job, is of no relation to former University

Newscom If the House approves the Marketplace Fairness Act, Villa Lagoon Tile won’t be out of business, but it might...