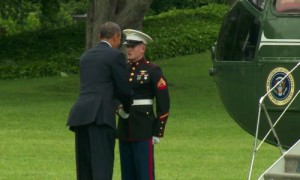 Last week, Barack Obama put the military to use by having a Marine shield him from the rain by holding an umbrella. Obama’s lack of respect was extended when he ignored the traditional salute as he boarded the Marine One helicopter. Someone obviously had to remind him that the Marine should have been saluted. Obama gave him a handshake instead.
In Case You Missed It:  Taliban Invites Russia, China, Pakistan, Iran, Turkey and Qatar to Ceremony Announcing New Government in Afghanistan
Posted in Tyranny and tagged Liberalism, Military, Obama, United Socialist States of America.

Terrorist Rebels to Hizbullah: Stop Attacking Us Or We’ll Hunt You to Hell

An official with the rebel Free Syrian Army (FSA) warned the Hizbullah terror group on Tuesday to end its involvement...