A Palestinian Authority resident muslim man robbed an Israeli cab driver at knifepoint on Wednesday. The incident took place next to the city of Maaleh Adumim east of Jerusalem. 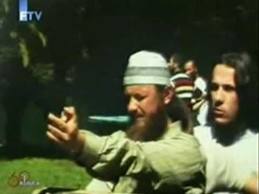 The Israeli driver was unhurt in the incident.

Police were informed and quickly gave chase on foot. The suspect responded by attempting to hurl a rock at police officers.

Police then fired in the air, and the suspect stopped. He was arrested and admitted to the theft.

A similar incident took place in January. Three PA Arab men got a ride from a 70-year-old Israeli cab driver, then attacked him, beat him, tied him up and began taking him toward Ramallah. During the journey they threw him out of the car.

The victim found PA police officers, who called Israeli paramedics. He was taken to hospital in moderate to serious condition.

The attackers were arrested in February.

Pakistan formally designates its Infidel population as dhimmis. What this means is Pakistan is openly legalizing discrimination against its minorities...