One of the most serious flaws with Obamacare is that its blizzard of regulations and mandates drives up the cost of insurance for people who buy it on their own. This problem will be especially acute when the law’s main provisions kick in on January 1, 2014, leading many to worry about health insurance “rate shock.”

Last week, the state of California claimed that its version of Obamacare’s health insurance exchange would actually reduce premiums. “These rates are way below the worst-case gloom-and-doom scenarios we have heard,” boasted Peter Lee, executive director of the California exchange.

But the data that Lee released tells a different story: Obamacare, in fact, will increase individual-market premiums in California by as much as 146 percent.

Lee’s claims that there won’t be rate shock in California were repeated uncritically in some quarters. “Despite the political naysayers,” writes my Forbes colleague Rick Ungar, “the healthcare exchange concept appears to be working very well indeed in states like California.” A bit more analysis would have prevented Rick from falling for California’s sleight-of-hand.

Here’s what happened. Last week, Covered California—the name for the state’s Obamacare-compatible insurance exchange—released the rates that Californians will have to pay to enroll in the exchange.

“The rates submitted to Covered California for the 2014 individual market,” the state said in a press release, “ranged from two percent above to 29 percent below the 2013 average premium for small employer plans in California’s most populous regions.”

That’s the sentence that led to all of the triumphant commentary from the left. “This is a home run for consumers in every region of California,” exulted Peter Lee.

Except that Lee was making a misleading comparison. He was comparing apples—the plans that Californians buy today for themselves in a robust individual market—and oranges—the highly regulated plans that small employers purchase for their workers as a group. The difference is critical.

If you’re a 25 year old male non-smoker, buying insurance for yourself, the cheapest plan on Obamacare’s exchanges is the catastrophic plan, which costs an average of $184 a month. (By “average,” I mean the median monthly premium across California’s 19 insurance rating regions.)

The next cheapest plan, the “bronze” comprehensive plan, costs $205 a month. But in 2013, on eHealthInsurance.com (NASDAQ:EHTH), the median cost of the five cheapest plans was only $92.

In other words, for the typical 25-year-old male non-smoking Californian, Obamacare will drive premiums up by between 100 and 123 percent.

Under Obamacare, only people under the age of 30 can participate in the slightly cheaper catastrophic plan. So if you’re 40, your cheapest option is the bronze plan. In California, the median price of a bronze plan for a 40-year-old male non-smoker will be $261.

But on eHealthInsurance, the median cost of the five cheapest plans was $121. That is, Obamacare will increase individual-market premiums by an average of 116 percent.

For both 25-year-olds and 40-year-olds, then, Californians under Obamacare who buy insurance for themselves will see their insurance premiums double. 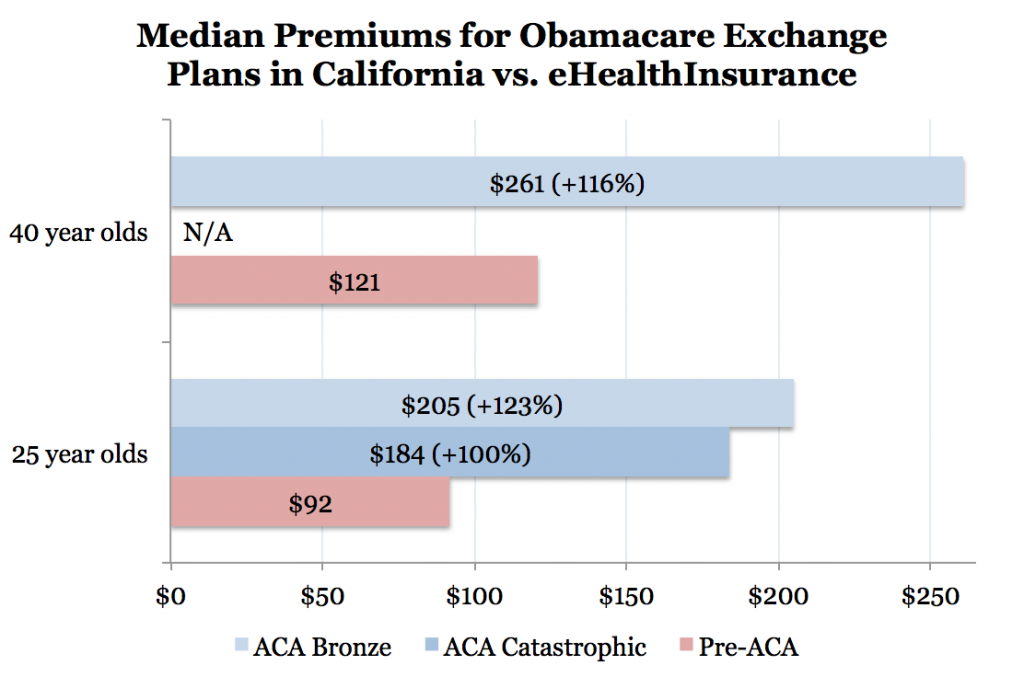 In the map below, I illustrate the regional variations in Obamacare’s rate hikes. For each of the state’s 19 insurance regions, I compared the median price of the bronze plans offered on the exchange to the median price of the five cheapest plans on eHealthInsurance.com for the most populous zip code in that region. (eHealth offers more than 50 plans in the typical California zip code; focusing on the five cheapest is the fairest comparator to the exchanges, which typically offered three to six plans in each insurance rating region.) 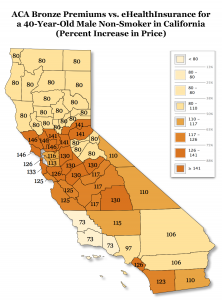 As you can see, Obamacare’s impact on 40-year-olds is steepest in the San Francisco Bay area, especially in the counties north of San Francisco, like Marin, Napa, and Sonoma. Also hard-hit are Orange and San Diego counties.

According to Covered California, 13 carriers are participating in the state’s exchange, including Anthem Blue Cross (NYSE:WLP), Health Net (NYSE:HNT), Molina (NYSE:MOH), and Kaiser Permanente. So far, UnitedHealthCare (NYSE:UNH) and Aetna (NYSE:AET) have stayed out.

It’s great that Covered California released this early the rates that insurers plan to charge on the exchange, as it gives us an early window into how the exchanges will work in a state that has an unusually competitive and inexpensive individual market for health insurance. But that’s the irony. The full rate report is subtitled “Making the Individual Market in California Affordable.” But Obamacare has actually doubled individual-market premiums in the Golden State.

How did Lee and his colleagues explain the sleight-of-hand they used to make it seem like they were bringing prices down, instead of up? “It is difficult to make a direct comparison of these rates to existing premiums in the commercial individual market,” Covered California explained in last week’s press release, “because in 2014, there will be new standard benefit designs under the Affordable Care Act.” That’s a polite way of saying that Obamacare’s mandates and regulations will drive up the cost of premiums in the individual market for health insurance.

But rather than acknowledge that truth, the agency decided to ignore it completely, instead comparing Obamacare-based insurance to a completely different type of insurance product, that bears no relevance to the actual costs that actual Californians face when they shop for coverage today. Peter Lee calls it a “home run.” It’s more like hitting into a triple play.

Obama attacked insurers in 2010 for much smaller increases

That Obamacare more than doubles insurance premiums for many Californians is especially ironic, given the political posturing of the President and his administration in 2010. In February of that year, Anthem Blue Cross announced that some groups (but not the majority) would face premium increases of as much as 39 percent. The White House and its allies in the blogosphere, cynically, claimed that these increases were due to greedy profiteering by the insurers, instead of changes in the underlying costs of the insured population.

“These extraordinary increases are up to 15 times faster than inflation and threaten to make health care unaffordable for hundreds of thousands of Californians, many of whom are already struggling to make ends meet in a difficult economy,” said Health and Human Services Secretary Kathleen Sebelius. “[Anthem’s] strong financial position makes these rate increases even more difficult to understand.” The then-Democratic Congress called hearings. Even California Insurance Commissioner Steve Poizner, a Republican running for governor, decided to launch an investigation.

Soon after, WellPoint announced that, in fact, because of lower revenues and higher spending on patient care, the company earned 11 percent less in 2010 than it did in 2009. So much for greedy profiteering.

So, to summarize: Supporters of Obamacare justified passage of the law because one insurer in California raised rates on some people by as much as 39 percent. But Obamacare itself more than doubles the cost of insurance on the individual market. I can understand why Democrats in California would want to mislead the public on this point. But journalists have a professional responsibility to check out the facts for themselves.

UPDATE 1: On Twitter, Jonathan Cohn of The New Republic argues that I’m being unkind to California (1) by not describing the mandates that Obamacare imposes on insurers in the individual market, and (2) not explaining that low-income people will be eligible for subsidies that protect them from much of the rate shock.

Jon is right that low-income individuals will be protected from these rate increases because of Obamacare’s subsidies, but if you’re not low-income, you face a double-whammy: higher taxes to pay for those subsidies, and higher indvidual-market insurance costs for yourself. A better approach would be to offer everyone access to low-cost consumer-driven health coverage.

UPDATE 2: A number of writers did call out California for the apples-to-oranges comparison last week, including David Freddoso, Philip Klein, andLanhee Chen.

Lanhee, writing in Bloomberg View, does the useful exercise of showing that even for plans with the same generous benefit package that Obamacare requires, eHealthInsurance is significantly cheaper:

To put it simply: Covered California is trying to make consumers think they’re getting more for less when, in fact, they’re just getting the same while paying more.

Yet there are many plans on the individual market in California today that offer a structure and benefits that are almost identical to those that will be available on the state’s health insurance exchange next year. So, let’s make an actual apples-to-apples comparison for the hypothetical 25-year-old male living in San Francisco and making more than $46,000 a year. Today, he can buy a PPO plan from a major insurer with a $5,000 deductible, 30 percent coinsurance, a $10 co-pay for generic prescription drugs, and a $7,000 out-of-pocket maximum for $177 a month.

According to Covered California, a “Bronze” plan from the exchange with nearly the same benefits, including a slightly lower out-of-pocket maximum of $6,350, will cost him between $245 and $270 a month. That’s anywhere from 38 percent to 53 percent more than he’ll have to pay this year for comparable coverage! Sounds a lot different than the possible 29 percent “decrease” touted by Covered California in their faulty comparison.

While Covered California acknowledges that it’s tough to compare premiums pre- and post-Obamacare, at the very least, it could have made a legitimate comparison so consumers could fairly evaluate the impacts of Obamacare.

UPDATE 3: Yuval Levin at National Review further addresses Jonathan Cohn’s argument that people should be ok with these rate increases, because the Obamacare insurance plans are more financially generous:

Some people will receive subsidies to help cover that cost, some won’t, but whether it’s taxpayers or beneficiaries paying the premiums those premiums will be significantly higher than they are now.

The comparison offered in the California press release helps make it clear why that is: Obamacare’s new insurance rules. Those rules would certainly help some people—people with pre-existing conditions in the individual market will find it easier to buy coverage for instance—but they will also raise premium costs very significantly.

Obamacare’s defenders can certainly point to the former fact, but they cannot deny the latter one and insist the new California data show there will be no rate shock, as many tried to do over the past week.

'Outreach to Islam summits' launched, 1st stop Chicago. A series of Muslim Outreach Summits are planned coast-to-coast by the Obama...