President Obama’s grandmother Sarah started the Sarah Obama Benevolent Fund Institute, otherwise known as the Mama Sarah Obama Children Foundation, which raises 90% of its monies primarily from donors in the United States and some from Europe. 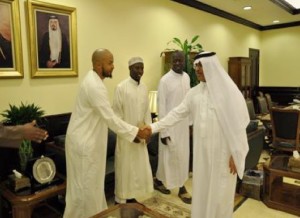 Those monies are solicited as humanitarian aid and according to the website, “to make a lasting impact on the lives of the orphans and underprivileged children by improving their housing, their education, their upbringing,” which “continued to weigh heavily on Mama Sarah.” All this and “to help the neglected HIV/AIDS infected and affected in Kogelo village by linking them to care-givers and professional health services providers.”

That’s what we’re told but when one peruses the foundation’s real activities in Arabic, it reveals a very dark side to the Obama’s family’s efforts.

Musa Ismail Obama, the president’s cousin—in an exclusive interview with Al-Jazeera TV—explained all the troublesome detail, which does not bode well when translated into English: the bulk of the Sarah Fund as it turns out sends little
to widows and orphans while the rest goes towards giving free scholarships to studying Sharia at the most influential Wahhabist centers in Saudi Arabia.

In the shocking interview, Musa was asked about his communications with cousin Barack, the president of the United States. The soft-spoken Musa explained that the President’s preferred method of communications was through one chosen conduit that relays messages back and forth with the family in Kenya by going through Uncle Sayid Hussein Obama. This is the man who was in attendance with Mama Sarah at Barack Obama’s inauguration in 2009.

The fund has little to do with secular education or the care for widows and orphans. It never once mentions anything in any Arabic media in regards to helping the HIV infected.

Perhaps most explosive is that president Obama’s uncle Sayid Hussein Obama is active in his work with the notorious Muslim World League (MWL) as reported by Saudi media.

the Muslim World League has extensive ties to terrorism. If Musa’s claims are true, that Sayid is Barack’s preferred point of contact with his Muslim family and that Sayid is dealing with the MWL, don’t the American people deserve
to know the extent of their president’s connections and loyalties to these individuals and groups?

The MWL has numerous connections with al Qaeda operatives. In fact, several MWL employees have worked with al Qaeda.

In Case You Missed It:  FBI Interviews Out-of-State Suspect in Threat to Shoot Women at the University of Michigan
Posted in Terrorism, Tyranny and tagged al-Qaida, Islam, Muslim, Obama, Saudi Arabia, Terrorism.

By Walid Shoebat Former Muslim Brotherhood Member; Now Peace Activist It has been learned that the relationship between President Barack Obama’s half-brother Malik...