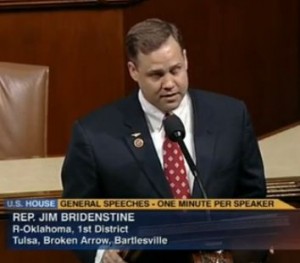 In just over a minute, Bridenstine rattled off the lengthy list of scandals and missteps that have occurred under President Obama. The GOP lawmaker said the fact that his administration is spinning out of control proves Obama is “not fit to lead” as commander in chief.

We present his remarks in full:

“The president’s Justice Department sold weapons to narco-terrorists south of our border, who killed one of our finest.

The president’s State Department lied about Benghazi with false information provided by the White House.

The president’s attorney general authorized spying on a Fox News reporter and his family for reporting on a North Korean nuclear test.

The president’s Justice Department confiscated phone records of the Associated Press because they reported on a thwarted terrorist attack.

The president’s Health and Human Services secretary pressures insurance companies she is supposed to regulate to promote ‘Obamacare,’ which is the same law she uses to force citizens to pay for abortion inducing drugs against their religious liberties.”

He then went on to say that the president’s “dishonesty, incompetence, vengefulness and lack of moral compass lead many to suggest that he is not fit to lead.”

“The only problem is that his vice president is equally unfit and even more embarrassing,” Bridenstine concluded.

In Case You Missed It:  Woman Who Escaped Communism and Arrested for False Crimes on Jan 6 Shows Up Outside Mar-a-Lago to Support President Trump
Posted in Tyranny and tagged Congress, Obama, Speaker John Boehner, Usurper Joe Biden.