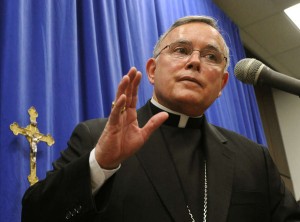 (CNSNews.com) – Roman Catholic Archbishop Charles J. Chaput is calling on Americans to wake up and recognize that the Founding Fathers’ vision of religious freedom is now threatened by the federal government.

“The day when Americans could take the Founders’ understanding of religious freedom as a given is over,” said the archbishop. “We need to wake up.”

Chaput, who leads the Roman Catholic Archdiocese of Philadelphia, pointed to Obamacare’s sterilization-contraception-abortifacient regulation as one example. The regulation, issued by Health and Human Services Secretary Kathleen Sebelius, requires almost all health-care plans in the United States to provide coverage for sterilizations, artificial contraceptives and abortion-inducing drugs to all women of reproductive age–even if the person or employer providing the insurance coverage and even if the female beneficiaries themselves do not want the coverage and believe it is morally wrong and violates their religious beliefs.

“[T]he HHS mandate can only be understood as a form of coercion,” the archbishop wrote in a recent column posted on the website of the Archdiocese of Philadelphia. The column is entitled, “Religious Freedom and the Need to Wake Up.”

Last year, the Catholic bishops of the United States unanimously approved a statement describing the HHS regulation as an “unjust and illegal mandate.” The unanimous bishops said the regulation not only violated the religious freedom of religious institutions but also the “personal civil rights” of individual Americans who will be forced to comply with it either as employers or employees.

Archbishop Chaput noted that the bishops believe “basic medical care is a matter of social justice and human dignity.” That principal, however, does not empower the government to force Americans to violate their moral and religious convictions.

“But health care has now morphed into a religious liberty issue provoked entirely–and needlessly–by the current White House,” the archbishop wrote. “Despite a few small concessions under pressure, the administration refuses to withdraw or reasonably modify a Health and Human Services (HHS) contraceptive mandate that violates the moral and religious convictions of many individuals, private employers and religiously affiliated and inspired organizations.”

The archbishop noted that the administration’s disregard for religious liberty in the enforcement of this regulation is in line with its refusal to defend the Defense of Marriage Act and its advocacy in the Hosanna-Tabor case.

The Defense of Marriage Act says that a state cannot be forced to recognize a same-sex marriage contracted in another state and that for federal purposes marriage is between one man and one women. The Supreme Court is now considering the constitutionality of DOMA, and the administration has asked the court that the law be thrown out, arguing that opposition to same-sex marriage (which is the position of the Catholic Church and many other religious denominations) is the constitutional equivalent of racial discrimination.

In the Hosanna-Tabor case, the administration argued unsuccessfully in the Supreme Court that the government could tell a Lutheran school it must restore as a “commissioned minister” a person who violated the teachings of the Lutheran faith.

“Coupled with the White House’s refusal to uphold the 1996 Defense of Marriage Act, and its astonishing disregard for the unique nature of religious freedom displayed by its arguments in a 9-0 defeat in the 2012 Hosanna-Tabor Supreme Court decision, the HHS mandate can only be understood as a form of coercion,” wrote the archbishop.

In Case You Missed It:  US vs. China: 5 Smart Ways to Keep Pushing Back

“Access to inexpensive contraception is a problem nowhere in the United States,” he said. “The mandate is thus an ideological statement; the imposition of a preferential option for infertility. And if millions of Americans disagree with it on principle–too bad.”

The archbishop went on to observe that abortion advocates use fraudulent language in describing their position.

“The fraud at the heart of our nation’s ‘reproductive rights’ vocabulary runs very deep and very high,” he wrote. “In his April 26 remarks to the Planned Parenthood Federation of America, the president never once used the word ‘abortion,’ despite the ongoing Kermit Gosnell trial in Philadelphia and despite Planned Parenthood’s massive role in the abortion industry.”

The archbishop noted that the scandal “involving IRS targeting of ‘conservative’ organizations … also has a religious dimension.”

“But the latest IRS ugliness,” he wrote, “is a hint of the treatment disfavored religious groups may face in the future, if we sleep through the national discussion of religious liberty now. The day when Americans could take the Founders’ understanding of religious freedom as a given is over. We need to wake up.”

The Obama Administration has been moving very slowly on the Syrian chemical weapons issue. Caution is in order, because the...