For four years, leftists blamed the religious sector, and especially hareidim, for the 2009 double murder in Tel Aviv’s Barnoar club, which caters to homosexual youths. A gunman opened fire on youths at the club, killing a young man and a young woman, and leaving others crippled. 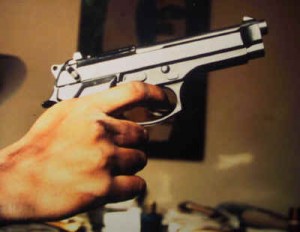 Now, police have arrested four people in connection with the attack. According to leaks, the police have solid evidence that the attack was carried out by a group of young men with criminal backgrounds in revenge for the alleged rape of their relative, a male youth, by the manager of the club.

Leftists are in no hurry to apologize for laying the blame at then-Interior Minister Eli Yishai’s doorstep, and for assuming that the perpetrators were religious people who hate homosexuals.

Meretz head Zehava Galon said that she was “shocked” by allegations that the attack was not a a hate crime. She insisted that the murderers shot club-goers because of their sexual tendencies. She ignored the false accusations over the last four years.

“Taking a weapon in your hand and shooting up a place is a hate crime,” she said. “The scene of the crime was an institute of the (gay) community.”

MK Nitzan Horwitz also refused to retract the repeated accusations he has made over the years against hareidim regarding the murder, preferring to gloss over his off-the-mark attacks on specific populaiton groups, adding “If this is not a hate crime,” he said, “I do not know what a hate crime is. I do not know what passed through the murderer’s mind, but the final result is a very grave hate crime against the gay community.”

In Case You Missed It:  BREAKING: Maricopa County Supervisor Steve Chucri RESIGNS From Office After TGP Exposé : “There Was No Cover-Up, The Election Was Not Stolen. Biden Won.”
Posted in Israel and tagged Crime, Freedom, Israel, Liberalism, Tel Aviv, Terrorism.

Why Are Terror Groups Tunneling Under All of Gaza?

June 9, 2013 16:08 by Pesach Benson Worth reading: Gaza terror groups are tunneling under the entire strip, not just...