Bosnia’s embattled Christians are leaving the country, and their exodus is being blamed on the Muslim majority and the increasing influence of Islamic law. 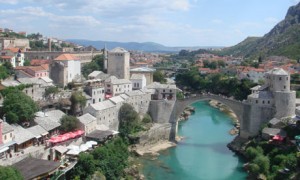 BosNewsLife reports Christians are fleeing to escape discrimination and the Islamization of their home country.

“What is going on there is the creation of a Shariah state and a base for the jihadists in Europe,” Geller said.

“Persecution of Christians is escalating, and the Islamic supremacists are crowding out the cultural Muslims,” Geller said. “Sarajevo used to be one of the most diverse cities in Europe. Now it’s almost entirely Muslim.”

The Heritage Foundation’s Allison Center for Foreign Policy Studies Analyst Steve Bucci says he’s not so sure the reports of widespread persecution are accurate.

“The Bosnians were nominal Muslims, but some foreign Islamists settled there. Even so, the Bosnian government did a good job of corralling them,” Bucci said.

“They weren’t invited into the fight. When I was on the ground over there in 2000-2001, there were no jihadists in power,” Bucci said. “If this has happened, it’s only been in the last two to three years.”

But Adriatic Institute for Public Policy Co-Founder Joel Anand Samy says “not so.”

He believes the threat the anti-Christian climate has been developing for years.

“There is a prevailing tide of discrimination toward Bosnian Croatian Catholics. Most disconcerting is that individuals’ properties have not been returned – specifically those belonging to Bosnian Catholics,” Samy said.

Yet, the situation is deeper than just surface-level prejudices. Samy says a disregard for religious freedom is only the first of many issues.

“Discarding individual liberty, undermining freedom of speech and subverting religious liberty are serious issues which must be addressed from within and also through principled external pressures,” Samy said.

Samy said the underlying issues are corruption and even human trafficking.

He said there are the serious concerns about the rise of radical Islam in Bosnia.

“Moreover, entities and corrupt politicians and their cronies within Bosnia Herzegovina are actively blocking reforms in the country through their illicit enrichment gained from confiscating private properties and channeling proceeds through the West’s financial institutions in the region,” he said.

Samy also pointed to corruption in the financial sector.

Organized crime and radical Islamic groups … flourish in Bosnia and the Balkan region.”

He cited Austria’s Hypo Alpe Adria Bank scandal, in which more than 8 billion euros are unaccounted for in the Balkan region, as an example.

Austrian taxpayers have been forced to pick up the tab.

Samy noted the scandal has not been fully investigated by authorities in Europe.

He pointed out that 17 years after the signing of the Dayton Peace accords, “citizens of Bosnia-Herzegovina live in a divided nation which does not have an independent judiciary and lacks dependable democratic institutions.”

The economy is still in shambles, with high unemployment, especially among the youth.

He suggested the backlogged cases in the court system “can be easily resolved through visiting judges from strong rule-of-law nations working with honest local judicial experts focusing on property rights cases.”

He said the country’s condition shouldn’t be a surprise, as Catholic and European authorities have been making the issues known.

Cardinal Vinko Puljic, for example, has communicated to Herman Achille Van Rompuy, president of the European Council, that the Catholic Church’s properties in Bosnia were confiscated under communism.

“Even after the recent Balkan war, the lands and properties have not been returned,” Samy said.

The West has known about these issues, Samy said, but “there is a void of principled leadership to address this growing problems.”

He asserted the West “can no longer ignore these fundamental issues which marginalize one group and relegate them to poverty due to employment discrimination and not returning their private properties.”

Geller said that while the U. S. nobly has attempted to help the Bosnians, its military intervention set the stage for Muslim advancement.

“We certainly made things worse for the Christians. Clinton didn’t understand Islam or jihad any more than mainstream politicians do now,” Geller said.

Bucci disagrees and says the Bosnians and others were helped greatly by the U. S. intervention.

“There’s been no widespread raping and pillaging for 20 years,” Bucci said. “The kids are in school and the battling factions were actually separated.”

“We put people in three zones. The Serbs were in the north; the Croats in the south. The Bosnians were in the center,” Bucci said.

He said the Catholic Christians were in the best shape when the U. S. ended its campaign.

“The Catholic area was by far the most prosperous. I’m not aware of any outright persecution. That would be surprising,” Bucci said.

Yet, Samy said the persecution is happening, and he believes the flow of Catholics from the region will continue.

“The factors I’ve listed will lead to a further exodus of Bosnian Croat Catholics from their homeland,” Samy said.

“For a region which experienced brutal ethnic extermination and now [is] experiencing economic turmoil and significant judicial problems, the targeted discrimination faced by Bosnia’s Catholics amounts to a return to a sophisticated form of cleansing – removing a people from their place of birth for their faith and ethnic identity,” he said.

The Islamic future of Britain

Britain is in denial. If population trends continue, by the year 2050, Britain will be a majority Muslim nation. Britain...