Moscow is not ready to give up on getting Russian troops posted on the divided Golan as part of the UN force policing the Israeli-Syrian separation sector, even after rejections by the UN and Israel. Monday, June 10, the Russian lawmaker Aleksey Pushkov, an influential foreign relations policy adviser to the Kremlin, said: “The issue has not been yet solved, it is being considered. We must take some real action because we cannot exclude that the Syrian-Israeli topic would be involved in large-scale military action.”

Shortly before he spoke, the military announced in Moscow that the Russian Airborne Troops had formed a separate brigade especially designed to serve as peacekeepers “under the aegis of the United Nations or as part of the force set up by the Russian-led CSTO (Russian-Asian) security bloc for combating terrorism. Russia, Armenia, Belarus, Kazakhstan, Kyrgyzstan and Tajikistan contribute special units.

Vladimir Shamanov, commander of Russian Airborne troops, said the new brigade had been awarded the status of “a peacekeeping unit” on June 1. He did not say by whom. debkafile’s military sources disclose the Moscow proposes to give the “peacekeeping” brigade from the Russian Airborne Troops “teeth” in the form of of MI-24 combat helicopters. 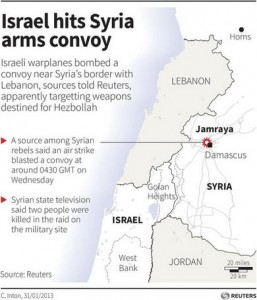 The idea of placing Russian peacekeepers on the Golan was first voiced by President Vladimir Putin on June 7, after Austria decided to withdraw its 377-strong contingent from the area over an outbreak of fighting there between Syrian troops and rebels.

The idea was quickly shot down by the United Nations and Israel on the grounds that the Israeli-Syrian 1974 ceasefire accord barred veto-wielding UN Security Council members from participation in the peacekeeping force.

On June 8, debkafile reported exclusively that Putin was determined to override Israeli and UN objections and get Russian troops deployed on the Syrian Golan by hook or by crook.

On June 9, Prime Minister Binyamin Netanyahu publicly rejected the Putin offer, saying Israel could not afford to place its security in the hands of international forces.
Speaking at a Moscow press conference on Monday, MP Pushkov went on to say that it was too early to say that Vladimir Putin’s suggestion of placing Russian peacekeepers on the Golan Heights lacked perspectives or could not be implemented.

As though on cue, the Hizballah-controlled Lebanese Al Akhbar Monday quoted President Bashar Assad as warning that, for him, opening a front on the Golan against Israel was “a serious matter” and would not just consist of firing a few improvised rockets from time to time.

This gave Pushkov the opening for his warning to Israel: That Israeli authorities would oppose this step (Putin’s offer) was not surprising, he said, but he warned about possible consequences: “Assad could be replaced by radical Islamists in comparison with whom Assad would seem an angel from heaven,” said the Russian lawmaker.

“The people who are now offering friendship to Israel would not necessarily see Israel as their partner when they come to power, rather they would see it as an enemy,” the Russian MP said, hinting at the references made by Hizballah and Syrian government spokesmen to the relations Israel had purportedly formed with certain Syrian rebel groups. Hizballah broadcasts even depicted outdated Israeli tanks and other equipment, booty captured in its 2006 war with Israel, to prove its point.

Therefore, Pushkov advised Israeli leaders to pay more attention to the possible future scenarios in Syria and take into account that Russia could play a positive and stabilizing role in the region.

debkafile notes that this was the first time any Russian official had mentioned the unmentionable: a possible future turn in the wheel of the Syrian conflict that would oust Assad and bring his foes, the Sunni Muslim Brotherhood and al Qaeda, to power in Damascus.

A group of leading journalists, most of them with religious backgrounds, toured the Temple Mount Thursday, and were accompanied by...