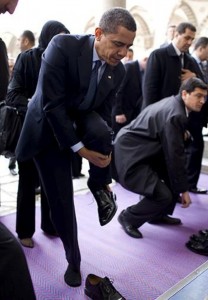 Around this time two years ago, Barack Obama delivered a prime time speech in which he told viewers waiting for him to shut up and make way for American Idol, “We have spent a trillion dollars on war, at a time of rising debt and hard economic times… America, it is time to focus on nation-building here at home.”

Even while he was delivering a speech promising to begin nation-building at home, the warplanes he had dispatched to Libya were bombing government targets in support of the Islamist uprising.

A month earlier, Obama had told Americans that he had a duty to protect “Benghazi, a city nearly the size of Charlotte”. Given a choice between nation-building in Charlotte and Benghazi; Obama chose Benghazi.

In September 2012, Obama gave yet another speech calling for a withdrawal from Afghanistan and nation-building at home. Ten days later, the diplomatic mission in Benghazi came under attack by militias and terrorists who had been allowed to take over the city by Obama’s Libyan intervention.

At the presidential debate, despite the broken promises on Libya, Obama once again brought out his “nation-building at home” card.

In response to a question about the challenges of the Middle East and the terrorist attack in Benghazi, Obama speechified, “The other thing that we have to do is recognize that we can’t continue to do nation building in these regions. Part of American leadership is making sure that we’re doing nation building here at home.”

The response should have come with a laugh track. Eight months later, the Nobel Peace Prize winner is preparing to lead America into his second Arab Spring war.

The script has already been written and it’s the same script that saw airtime in Libya. Claim an imminent threat to civilians that is actually a threat to the terrorists. Carve out a No Fly Zone. Arm the terrorists. And then sit back and wait for the next Benghazi.

To invade Libya, Obama lied and told the American people that the residents of Benghazi were about to suffer a massacre that would stain “the conscience of the world.” No such massacre had taken place or was ever going to take place. The only innocent people who wound up massacred in Benghazi were the Americans sent there by Hillary Clinton.

This time, swap out Aleppo or Homs for Benghazi as the cities badly in need of American protection. Never mind that the Christians of Aleppo and Homs, the only innocent parties in a religious war between a Shiite government and Sunni terrorist groups, are in far more danger from the Islamist Sunni terrorists that Obama is proposing to arm.

The Free Syrian Army’s Farouq Brigades went door to door expelling Christians in Homs. Of the 160,000 Christians in the city, there are now barely a 1,000. Christians in Aleppo have faced kidnappings and car bombings. Some have chosen to arm themselves against the rebels.

“We see on TV armed young men with beards shouting, ‘Allah is great!’ and calling for jihad. We have the right to defend ourselves,” one Christian in Aleppo said. But Obama won’t be supplying the Christians with any weapons. Those are reserved for the bearded young Allah-shouters.

In Qseir, the city recently recaptured by the Syrian Army from the Sunni militias, whose loss partly triggered the rush to war by the Western allies of the Muslim Brotherhood, most of the Christians had fled a place where they were once 10 percent of the population following Sunni Muslim persecution.

The 10,000 Christians of Qseir were ordered to leave the city by loudspeakers on mosques. If Obama’s intervention helps the Islamist militias retake Qseir; there will soon be no Christians left in the city at all. And the same goes for Homs and Aleppo.

Intervention in support of the Islamist militias in Syria is nothing more than a Christian ethnic cleansing project. And those supporting it should be treated like any other advocates of ethnic cleansing.

Obama’s intervention in Libya turned Benghazi over to Islamist militias who have persecuted Christians. His intervention in Syria will ethnically cleanse Christians while rewarding the Muslim Brotherhood with another building block for their caliphate plans.

The Syrian War, like the Libyan War, is built on a pyramid of lies. There are no good options in Syria and nothing we do will help anyone there.

The vaunted “Red Line” was and is irrelevant. The White House delayed taking a position when the evidence of a breach first came in and dispatched its media allies to make excuses for not taking an immediate stand because the line was never the issue. The determining factor was whether the Sunni rebels could win on their own or not.

It was only when it became clear that the Sunni rebels were being rolled back by government forces, that the Red Line began flashing in the White House. And if there is any doubt of that, Politico quoted an administration official as saying, “The decision was ultimately driven by the discovery Assad used [chemical weapons], but there were a number of other factors in place that were also important… “Would we have made [the determination Assad had breached the red line] even if we didn’t have the evidence? Probably.”

Had an official of the previous administration made such a statement around the Iraq War, there would have been talk of impeachment, but the media has long since gotten used to swallowing the bizarre lies put out by an administration that ended the Iraq War twice and kept insisting that Al Qaeda was on the run even as it was expanding across North Africa.

Before the campaign, Obama yammered about nation-building at home. Libya isn’t home. Neither is Syria.

While Obama botched Afghanistan, he has insisted on committing the United States to intervening in every nation-building war that the Arab Spring can throw up. Despite slashing the military to the bone, he hasn’t slaked his appetite for new wars. Even though he has dismantled the ability of the FBI to track Islamic terrorists at home, he has busily devoted government resources to helping them win abroad.

Syria is not America’s war. It is the Muslim Brotherhood’s war. Instead of nation-building at home, Obama is caliphate-building abroad.

The creation myth of American wealth is almost always rooted in the entrepreneur. It's the two kids who start a...