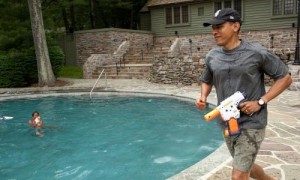 As boys around the country (some as young as five years old) are getting in trouble for playing games such as cops and robbers or cowboys and Indians or for even holding their hand in the shape of a gun, Barack Obama’s Father’s Day picture shows him running around a pool… with a toy gun. Horrors! What kind of message is he sending to his children?

My question, or course, is sarcastic, and the whole incident just shows how messed up this country is.

For Father’s Day, the White House tweeted a series of pictures under the title Our 13 Favorite Photos of President Obama Being a Dad. One of the pictures was from Camp David where Obama was running around the pool with a water gun. Now, I’m curious… In this age where boys are not allowed to be boys, where any game involving a toy gun is deemed dangerous and violent, then why is Barack Obama parading around with one too?

As Dimitrios Halikias writes in National Review, the cases of officials coming down against children simply for playing is getting out of control:

Last month, a six-year-old student was given detention after “traumatizing” classmates with a Lego gun the size of a quarter. A few weeks ago, several students were suspended from school for playing with a nerf gun — that had been brought in at the request of a teacher for a class lesson. And in the most ludicrous story yet, a second-grader was suspended from school in March for chewing a Pop Tart into the shape of a gun. The student recently appealed the suspension and was denied by the acting superintendant.

But that’s not all. Back in April, I wrote about Jared Marcum, an eighth-grader who was suspended because he wore an NRA shirt with the image of a gun to school. Now, it turns out that the trouble may continue for the boy, as he could face time in jail for his “crime.”

A West Virginia teen who was arrested after refusing to change out of his National Rifle Association T-shirt at school could face a fine and even jail time on a related charge.

A judge in Logan County Court is allowing prosecutors to charge 14-year-old Jared Marcum with obstructing an officer in the April 18 incident, reported CBS affiliate WOWK-TV.

The arresting officer in Logan, a city about an hour south of Charleston, said that Marcum wouldn’t stop talking during the frenzy at Lincoln Middle School, the station said.

The judge’s decision last week against Marcum now means prosecutors can seek a $500 fine and up to a year in jail for the former eighth-grader.

What is going on with this country? It’s time for all of these school officials to take a deep breath and see just how idiotic they are being.

And as far as Barack Obama is concerned, what kind of message is he sending? He rails against “gun violence,” and he clearly knows that anything he does will be photographed, yet he thinks it’s ok to play with a toy gun in front of his children. Does that mean that all these other cases of kids playing with toy guns warrants some kind of presidential pardon?

Perhaps Obama should pay a visit to the Pop Tart kid’s school and say “lighten up.” But we all know that won’t happen. Obama has one standard for himself and the ruling elite and one standard for the rest of us.

In Case You Missed It:  Joy Reid Says DeSantis’ Warning to Potential Looters is a Racist Threat from ‘Segregationist’
Posted in Tyranny and tagged Crime, Freedom, Liberalism, Obama.

Iran's new president will find a partner in the United States if he comes clean on the Islamic Republic's controversial...