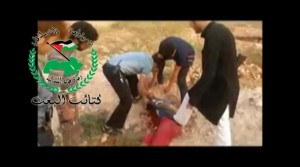 A major transition in US counter-terrorism doctrine is unfolding.  Your hard-earned tax dollars at work. After they behead a boy, they shoot two women to death.  These are terrorist that the Obama is supporting with American tax dollars, these are the people Obama wants to control Syria.
[youtube 9JchKWNmdAs nolink]

In Case You Missed It:  Inflation in Wholesale Prices Increases to 6.6% – The Largest Increase Since the Measurement Was First Compiled
Posted in Terrorism, Tyranny and tagged Islam, Jihad, Muslims, Obama, Syria, Taxation, Terrorism.

Equality and the Redefinition of Marriage

At a reception last week for Lesbian, Gay, Bisexual and Transgender Pride Month, President Obama reiterated his support for the...