Lockheed Martin Aircraft Industries has announced that Israel will be the first nation to receive its F-35 stealth fighter jets, the most expensive weapon in U.S. history.
The company’s vice president, Steve O’Bryan, made the announcement Tuesday at the Paris Air Show. 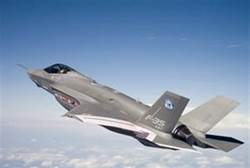 The F-35 is a fifth-generation aircraft capable of evading radar and integrated air defense systems.

There has been great competition for purchase of the aircraft, with South Korea, Canada and other nations in the potential customer lineup.

But an article published Wednesday in Britain’s The Globe and Mail newspaper has raised the specter of cyber espionage in connection with theft of the design data for the F-35 Joint Strike Fighter.

Chinese military hackers have targeted U.S. government and big business programs repeatedly over the past several years, a major security issue that has only recently come under serious scrutiny by the White House. And China is among those nations currently developing its own fifth generation fighter jets. Russia is another.

If in fact hackers managed to penetrate Lockheed Martin’s tight security net and stole the sensitive design data for the new F-35 stealth fighter jet, rival firms will have a major advantage over the U.S. in the market, Pentagon defense acquisitions chief Frank Kendall told a Senate hearing on Wednesday.

“I’m not at all confident that our unclassified information is [as] well-protected,” he told the lawmakers. “A lot of that is being stolen right now and it’s a major problem for us.”

Israeli health officials said they were keeping a close eye on the potential spread of a new virus that has...