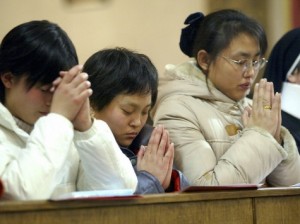 By some estimates, China’s Christianity explosion could even eclipse the number of U.S. Christians within this century, making China the most populous Christian country on earth.

A religious demographic shift of that magnitude could have profound geopolitical implications.

“Some Evangelicals envisage Christianity’s becoming China’s dominant religion, thus turning the country into an ally in the struggle against radical Islam,” writes journalist Simon Scott Plummer. “This astonishing vision of China as a global evangelistic powerhouse–any more than that of their country as an American ally against radical Islam–cannot have made comfortable reading for the Communist Party.”

China’s 1982 constitution contained guarantees of religious freedom but forbade the “use of religion to engage in activities that disrupt public order, impair the health of citizens or interfere with the educational system of the state.” When the Communist regime decides that has happened, imprisonment, torture, and re-education camp terms can be administered.

In Mainland China, Protestant churches must register with the Three-Self Patriotic Movement (TSPM) and China Christian Council (CCC) in order to operate legally. The TSPM/CCC, however, is a government body, therefore many house churches, or “underground churches,” refuse to be part of the TSPM/CCC because they argue that Christ is the head of the church, not the government.

According to the ChinaAid report, methods for suppressing Christianity in China include “forcibly banning and sealing up churches, pressuring churches to join the official ‘Three-Self’ church system, detaining church leaders and sending them to labor camps on the pretext of ‘suspicion of organizing and using a cult to undermine law enforcement,’ and strictly restricting the spread of the Christian faith among students.”

Now, with new Chinese leadership in place, churches are watching to see whether Xi Jinping will ease restrictions and the registering of Chinese churches. China’s 67 million Christians–and the world’s over 2 billion other Christians–are praying he will.

In Case You Missed It:  Students in Colorado walk out of schools in protest of worthless mask mandate
Posted in Freedoms and tagged China, Communism, Freedom.

This is a gamechanger, Boeing and the US Air Force late last year demonstrated a working electro-magnetic pulse (EMP) device over a...