This is a gamechanger, Boeing and the US Air Force late last year demonstrated a working electro-magnetic pulse (EMP) device over a military compound in the Utah desert.  A spokesperson for Boeing stated, ” we turned science fiction into science fact.” 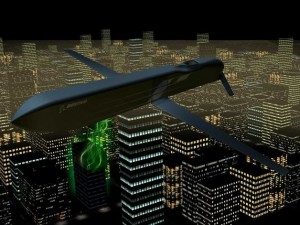 The story received very little attention in the media, and a lot of us who follow science and technology research missed it – we now have a working electro-magnetic pulse (EMP) missile that will be used as an offensive or defensive weapon by the military.  The project test was announced on September 22, 2012, and codenamed, the ‘Counter-Electronics High Power Advanced Missile Project’, or simply ‘CHAMP’. This is the first time a real EMP missile has been tested with positive real world results.

For years many people felt that in order to create an EMP weapon, there might be some collateral damage involved from some form of an explosion used to create the pulse.  However, this system does not make use of any explosive whatsoever, thereby resulting in zero collateral damage.

Boeing in partnership with the US Air Force Research Laboratories Directed Energy Directorate created the CHAMP weapons system, and successfully tested the system over the Utah desert on a military compound.  The exact details on how the device was made will remain a secret, but we do know that it is transmitted from a missile-like device that flies over the intended target and directs its concentrated microwave energy.