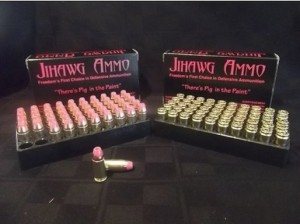 An Idaho company is marketing bullets coated in pork-infused paint with the supposed aim of deterring Islamist terrorists. “Jihawg” ammunition claims to offer a “peaceful and natural deterrent” to radical Islam.

“Jihadists fear being defiled by pork, especially during Jihad,” the firm’s website says. “Jihawg ammunition is Haraam or unclean to the Jihadist. So when you hear the radical battle cry – ‘allahu akbar!’ It’s time to put some ham in MoHAMed.”

The company has it wrong about Muslims and pork, say some experts on religion. “Muslims, especially unknowingly, would not be banned from heaven for eating or getting hit by pork,” Prof. Shannon Dunn of Gonzaga University told HuffPo.

The bullets have received a mixed reception at best, with over 6,000 Facebook likes since the page was launched in late April. They’ve also been criticized on social media and condemned by a few gun enthusiasts. “If you want to defend yourself, buy the most effective ammunition possible. Don’t buy crap covered in pork. As a community, we are better than this,” writes Steve Johnson, founder of the Firearm Blog.

The ammunition is being promoted on right-wing site World Net Daily: “Readers of this column are in the unique position of being among the first to learn of this new, pork-painted ammunition, and as such have the opportunity to be thought-leaders on the social merits of the product,” writes Jeff Knox.