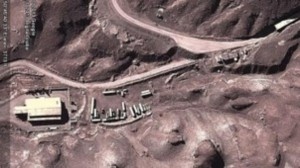 Speaking to the Washington Post’s Lally Weymouth on Thursday, Netanyahu said that the elections in Iran “reflect a deep dissatisfaction of the Iranian people with its regime. Unfortunately, this result doesn’t have the power to change Iran’s nuclear ambitions. These are determined not by the elected president but by the so-called supreme leader, [Ayatollah Ali] Khamenei.

He noted that the nuclear program is “Guided and controlled by Khamenei. He remains committed to pursuing the path of arming Iran with nuclear weapons, and I’m afraid the elections are not going to change that.”

President-elect Hassan Rowhani “was chosen as one of a slate of candidates that conform to Khamenei’s extremist views,” said Netanyahu. “They eliminated hundreds of candidates and left seven. Rowhani used to be the national security adviser of Iran and the former nuclear negotiator. He’s the author of a doctrine — I call this doctrine ‘talk and enrich.’ He wrote the book on it.”

“We can’t let the Iranian regime play this game. They play for time. They continue to enrich. They broaden the base of their nuclear program. What Iran is seeking is not one or two bombs but 200 bombs. They’re building ICBMs [intercontinental ballistic missiles] parallel to developing their nuclear weapons program. The ICBMs are not intended for us; they’re intended for you. Within six to eight years, they intend to be able to reach the continental United States. To have a regime like this — that is, a rogue regime — have a nuclear arsenal with their messianic, apocalyptic ambitions is to imperil the entire world. It is to put the peace of the world in great jeopardy,” warned Netanyahu.

Asked about the efforts by U.S. Secretary of State John Kerry to restart peace talks between Israel and the Palestinian Authority, Netanyahu said, “We should enter immediately into negotiations without preconditions. That’s been my view for the last four years, and I hope it becomes the Palestinian view. If Secretary Kerry, whose efforts we support, were to pitch a tent halfway between here and Ramallah — that’s 15 minutes away driving time — I’m in it, I’m in the tent. And I’m committed to stay in the tent and negotiate for as long as it takes to work out a solution of peace and security between us and the Palestinians.”

He added that “there are many things that I need to successfully close a deal, but I don’t ask them of Abu Mazen [PA Chairman Mahmoud Abbas] in advance. Israel has withdrawn from territory, from Lebanon and from Gaza, with the express promise that once we do so we’ll have peace and security. But in fact, the opposite happened. We gave land, but we didn’t get peace. We got, in the case of Gaza, 12,000 rockets on our cities. In the case of Lebanon, we got an Iranian enclave with another 12,000 rockets. We can’t afford to have that happen again.”

“We’ll have to have an arrangement that assures our security, that tells us what’s on the other side in a Palestinian state,” stressed Netanyahu. “Is it another Iranian client-state that is committed to our destruction? That arms itself with missiles and rockets? Or is it something that actually changes the climate, that teaches its people and its children to live in peace with us and is genuinely demilitarized? These are questions that cannot be resolved before we enter the tent. They’ll have to be resolved in order for us to leave the tent with an agreement. But I don’t place any of our conditions and our demands in advance of the negotiations, and I hope the Palestinians don’t either.”

He added that the freeze on Jewish construction in Judea, Samaria and eastern Jerusalem during his last term, after which Abbas still refused to come to the negotiating table, was proof that “the problem isn’t the settlements.”

“The real reason [for the continuation of the conflict] is the persistent refusal to recognize a sovereign Jewish state in any boundary,” Netanyahu told the Washington Post. “That was and remains the core of this conflict. To solve this, the Palestinians will have to recognize the Jewish state just as we recognize a Palestinian state. Both peoples, both nations, deserve a nation-state of their own. Palestinians, if they wish so, will go to the Palestinian state; Jews, if they so wish, can go to the Jewish state. And we’ll have to have security and demilitarization agreements between us. But the beginning of the conflict and the root of the conflict is the refusal to recognize Israel in any boundary. Once this is overcome, I think there is a chance for peace. I think that is never recognized because people are fixated on one of the results of conflict, which are the settlements, but it’s certainly not its cause.”

The Corker–Hoeven amendment in the Senate’s immigration bill (S. 744) contains loads of pork, special deals, and more spending. A...