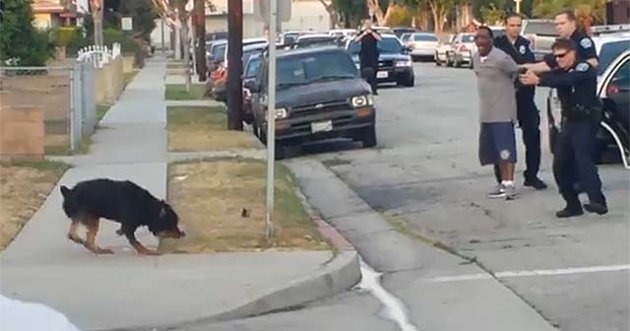 The undated video posted June 30 on YouTube shows a man driving a rental car up to an apparent police barricade at 137th and Jefferson and then stopping to use his camera to capture images of the scene.

Attorney Michael Gulden said his client Leon Rosby was watching and taking video of the Hawthorne SWAT team when police claimed Rosby was obstructing officers during the barricade.

Rosby, 52, is seen in video footage walking with Max, his two-year-old Rottweiler, near several patrol cars to capture the scene on his phone.

After an exchange with nearby officers, Rosby is heard saying the words, “civil rights violation” before returning the dog to his vehicle.

As officers begin to proceed toward Rosby, he also begins walking in the direction of the officers and is then taken into custody without any further exchange.

While Rosby is handcuffed, Max is seen escaping from the vehicle through an open rear window and then approaching the officers while barking.

When one officer motions toward the animal, the dog is seen jumping up and toward the officer, at which point four shots were fired, according to Gulden.

A second video apparently shows Rosby stopped at the intersection and then driving slowly past the scene prior to parking his vehicle.

Gulden said he plans to file a lawsuit against the Hawthorne Police Department.

Rosby said one of the officers named in the suit spotted him at the barricade scene.

In June, the Hawthorne Police Department said it was one of only two departments in the country using a therapy dog on the force.

A statement from the Hawthorne Police Department said “the dog lunged and made aggressive movements toward the officer(s)…Fearing that the attacking Rottweiler would imminently bite the officer(s), one officer fired his duty weapon several times, striking and killing the dog.”

(CNSNews.com) – The U.S. State Department is planning to build two women’s dormitories for universities in Afghanistan, at a cost...