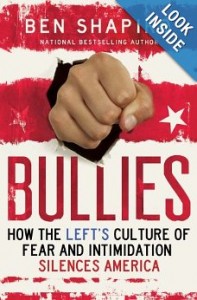 From the editor-at-large of Breitbart.com comes a galvanizing and alarming look at the strategy and tactics of leftist thuggery.They bullied people the last election to vote for Obama, now these same liberals are complaining that their paychecks are smaller.

The left like to pretend that they oppose bullying with all their hearts and souls, the truth is far darker: the left is the greatest purveyor of bullying in modern American history. Bullying has morphed into the left’s go-to tactic, as they attempt to quash their opponents through fear, threat of force, violence, and rhetorical intimidation on every major issue facing America today.

Ben Shapiro in his new book uncovers the simple strategy used by liberals and their friends in the media: bully the living hell out of conservatives. Play the race card, the class card, the sexism card. Use any and every means at your disposal to demonize your opposition—to shut them up. Then pretend that such bullying is justified, because, after all, conservatives are the true bullies, and need to be taught a lesson for their intolerance. Hidden beneath the left’s supposed hatred of bullying lies a passionate love of its vulgar tactics.

The left has created a climate of fear wherein ordinary Americans must abandon their principles, back abhorrent causes, and remain silent. They believe America is a force for evil, that our military is composed of war criminals, and that patriotism is the deepest form of treason. They incite riots and threaten violence by playing the race card, then claim they’re advocates for tolerance. Disagree with Obama? You must be a racist. They send out union thugs and Occupy Wall Street anarchists to destroy businesses and redistribute the wealth of earners and job creators. No target is off limits as liberal feminists declare war against stay-at-home moms, and gay activists out their enemies, destroy careers, and desecrate personal privacy.

Just in case you hadn’t noticed, the overwhelming majority of the vitriol on display in the public square originates from those on the Left. Honest, hardworking, law-abiding conservatives like myself have been putting up with it for years and it has only gotten worse since Barack Obama became President. Most of us are bound and determined not to stoop to the same tactics employed by our ideological adversaries.

These are the most despicable people in America, bullying their opponents while claiming to be the victims. Shapiro’s book takes on the leftist bullies, exposes their hypocrisy, and offers conservatives a reality check in the face of what has become the gravest threat to American liberty: the left’s single-minded focus on ending political debate through bully tactics.

In Case You Missed It:  Virginia Governor Race Causing Panic Among Democrats: ‘Everyone Should Be Very Worried’
Posted in Tyranny and tagged Democrats, Liberalism, Obama.

Threats of ‘lynchings’ over Trayvon verdict

Ihe Trayvon Martin case, in which neighborhood watchman George Zimmerman is on trial for murder, could go badly. “The public...