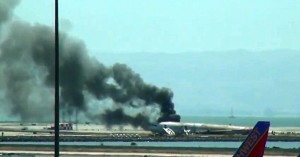 SAN FRANCISCO — A federal aviation official says an Asiana Airlines flight #214 has crashed while landing at San Francisco airport on runway 28. It was not immediately known whether there were any injuries.

A video clip posted to Youtube shows smoke coming from a silver-colored jet on the tarmac. Passengers could be seen jumping down the inflatable emergency slides.

According to a witness, around 11:20 a.m. the plane was just about to land, its landing gear had come down the back tail hit the ground and struck the runway which caused the tail of the plane came off.  The airline is based in Seoul, South Korea, its website says their Boeing 777’s can carry between 246 to 300 passengers, there are reports coming out  of burned passengers.

“After wobbling for a minute after the tail was knocked off, the aircraft came to a stop on runway on upward.”

In Case You Missed It:  Nestlé caught sending junk food into Amazon rainforests where children as young as seven are now morbidly obese
Posted in Freedoms and tagged California.

$150,000 in the Bank and Drawing Income from Social Security’s SSI

Newscom An individual with $150,000 in the bank received Supplemental Security Income (SSI), a program intended for blind, disabled, or...