The Knesset on Wednesday passed on its preliminary reading a law that would forbid the import and sale of foie gras, the delicacy made of goose liver than animal rights groups have condemned because of the cruel practices farmers use to produce it. The law was proposed by MK Dov Lipman (Yesh Atid), who was joined by 20 other MKs in sponsoring it. 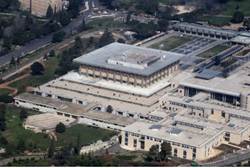 Is the Knesset in the capital of Israel?

The law would complement a 2003 High Court decision that ordered the Agriculture Ministry to actively enforce a ban on foie gras production, which entails the force feeding of geese and ducks, the main source for the fatty liver delicacy. Since 2006, the Ministry has been consistently enforcing the production ban, but importing foie gras for sale in Israel was still legal. The new law will completely ban the item from supermarket freezers and restaurant menus.

Foie gras is a spread based on goose liver fat, and is considered a delicacy in several European cuisines. Animal rights, environmental groups, and consumer groups have long complained about the methods used by commercial foie gras producers, who force-feed geese in order to develop fattier livers, allowing them to “harvest” more fat and produce more foie gras. Opponents of the production methods say that the geese subjected to force feeding are often unhealthy, so besides committing acts of cruelty, producers are also endangering the public.

In a statement attached to the law, Lipman said that “Israeli society decided years ago to stop the force-feeding of animals, in order to put an end to the torture of animals that this leads to. We should thus also ban the sale of foie gras. It is our responsibility to protect the helpless. Banning the sale of this item is a matter of logic and basic fairness – not to mention the Jewish legal requirement to prevent the suffering of animals,” which Israel, as a Jewish state, should embrace as well, Lipman said.

Fifty nine MKs voted in favor of the law, while ten were opposed. The law will now be sent to the Knesset Control Committee in order to prepare it for its first reading.

In Case You Missed It:  COVID Enforcer and Climate Warrior Justin Trudeau Lands in Costa Rica on Private Jet, Unmasked with His Family as Canadians Suffer
Posted in Israel and tagged Freedom, Israel, Knesset.

Has the Temple Mount Become a Muslim Theme Park?

The Temple Mount, which is Judaism's holiest location, has turned into a theme park for Muslim children in the course...