Working near the Temple Mount in Jerusalem, Hebrew University of Jerusalem archaeologist Dr. Eilat Mazar has unearthed the earliest alphabetical written text ever uncovered in the city. 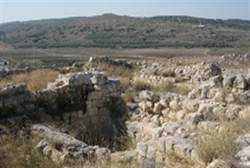 The inscription is engraved on a large pithos, a neckless ceramic jar found with six others at the Ophel excavation site. According to Dr. Mazar, the inscription, in the Canaanite language, is the only one of its kind discovered in Jerusalem and an important addition to the city’s history.

Dated to the tenth century BCE, the artifact predates by two hundred and fifty years the earliest known Hebrew inscription from Jerusalem, which is from the period of King Hezekiah at the end of the eighth century BCE.

A third-generation archaeologist working at the Hebrew University’s Institute of Archaeology, Dr. Mazar directs archaeological excavations on the summit of the City of David and at the southern wall of the Temple Mount.

The discovery will be announced in a paper by Dr. Mazar, Prof. Shmuel Ahituv of Ben-Gurion University of the Negev, and Dr. David Ben-Shlomo of the Hebrew University, following their extensive research on the artifact. Prof. Ahituv studied the inscription and Dr. Ben-Shlomo studied the composition of the ceramic materials.

The press release issued Wednesday did not specify what the inscription actually says.

Archaeological finds in Jerusalem, and specifically in the Temple Mount region, are also of political significance. Some of the finds, like the recent discovery of evidence corroborating contemporary accounts of the Roman seige of the Second Temple, or the possible site of the Tabernacle at Shilo, fly in the face of Muslim Arab attempts to deny that the Jewish Temple ever existed.

While the anti-Israeli propaganda machine is sophisticated and heavily funded, the Israeli counter-effort has been relatively ineffective. However, every few weeks or months, it appears that the Jews’ ancestors, along with modern archaeologists, are there to lend a hand in the campaign to prove that Zion was indeed the historical homeland of the Jews, long before Mohammed was born in Arabia.

Late-Night Shenanigans in the House

The House leadership appears to be pulling a fast one on the American public and even fellow House members when...