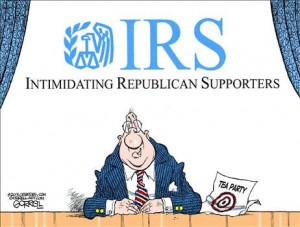 A top Republican senator is pressing Attorney General Eric Holder for answers following allegations by a government watchdog that the IRS may have improperly accessed the tax records of a political donor or candidate — but the Justice Department declined to prosecute the case and instead the Department of Justice had solicited the public for information about  Zimmerman in their Witch Hunt on an alleged federal civil rights prosecution on a man already found innocent by a jury of his peers.

Sen. Charles Grassley, R-Iowa, questioned whether that DOJ decision regarding the IRS was “politically motivated.”

The original allegation was one of several in a letter from J. Russell George, the inspector general who oversees the IRS, to Grassley. For the first time, George revealed claims that IRS officials targeted political candidates for audits, and that, separately, donor or candidate tax information was improperly accessed or disclosed.

To date, the IRS scandal has focused mainly on the agency’s practice of targeting conservative groups for additional scrutiny as they applied for nonprofit status.

And for the first time, the letter also raised questions about the Justice Department’s role in allegations of IRS misconduct.

In one case, George said in his letter, “we presented evidence of a willful unauthorized access to the Department of Justice, but the case was declined for prosecution.”

Grassley has since written a letter to Holder asking for details on who made the decision not to prosecute and why.

In a written statement, he questioned whether the Justice Department had an ulterior motive in not pursuing the case.

He continued: “The public needs to know whether the decision not to prosecute these violations was politically motivated and whether the individuals responsible were held accountable in any other way.”

The letter from the inspector general did not say which political candidates or donors may have been affected. He confirmed only that the alleged incidents happened since 2006. This would have spanned the presidencies of both George W. Bush and Barack Obama.

In the fourth case, though, his office found evidence that the access was “willful.”

George also confirmed two cases “involving allegations that the IRS targeted for audit candidates for public office.” He said his office is still reviewing those allegations.

It’s unclear who was affected by these incidents. Grassley originally asked the inspector general for information following a news report on Republican donors stepping forward to claim they had been audited by the IRS.

Writing with Sidewalk Chalk Can Earn You Hard Time?

ROBIN TINAY SALLIE/KRT/Newscom Jeff Olson has no criminal record, has hurt no one, and has done no significant damage to...