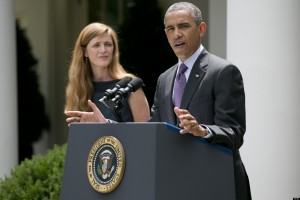 Barack Obama and his merry band of extremists are some of the most out-of-the-mainstream operatives in American politics today and the woman who is our US Security Council to the UN has a long history of essentially calling for the destruction of Israel, our only true ally in the Middle East.

It is instructive to look at some of Powers’ past actions and positions to remind us of why this extremist should not be confirmed.

For one thing, Power has long been a supporter of the terror group Hamas as a balance to the only mid eastern democracy that is Israel.

Power has, for instance, long been an advocate of funding the Palestinian Authority and Hamas and giving them military assets so that they can oppose Israel quite despite that Hamas and the PA have never reversed their stated goal of bringing genocide to Jews.

In one case Power, a former “journalist” (read left-wing activist) once said that the USA is just like Nazi Germany with its foreign aid practices (they are “too stingy,” she claimed) and is a supporter of genocides.

In another case she claimed that the USA is guilty of “war crimes” and should apologize to the world.

She also once called for the US to invade Israel and destroy her despite “the powerful” political constituency inside the US (i.e. the Joooooos). In the following video she also said that we should fund the Palestinians so they can oppose Israel…

Another thing that makes her entirely unqualified to be an official in any US government office was contained in that video above. In it she claims we are a “liberal democracy.” But, of course, she hasn’t a clue what she is on about. We are a Constitutional Republic, not a “liberal democracy.”

This is the sort of Jew-hating, anti-American, ill-informed woman Obama wants to represent us at the UN. This doesn’t deserve to be appointed dog catcher.

You might be able to help stop this anti-American, anti-Semite by calling your Senators. Give it a try, won’t you?

In Case You Missed It:  Adam Schiff Sure Seems Worried About The New House Committee On The Weaponization Of Government
Posted in Tyranny and tagged Anti-Semitism, Israel, Obama, United Nations.

The director general of Saudi Arabian Airlines on Friday defended his company’s decision to discriminate against Israeli citizens by refusing...