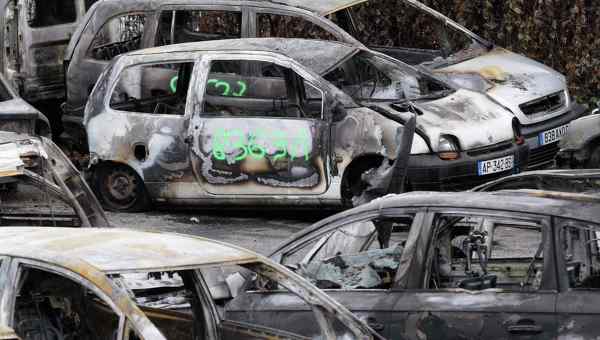 Notice the Arabic Graffiti painted on one of the burned cars.

At least 20 cars were torched and four people arrested in a second night of rioting after French police enforced a law banning the wearing of a full face veil in public places.

The violence, which began in the town of Trappes, some 50 miles north of Paris, had spread within a day to the suburb of Elancourt.

On Friday night, police faced a mob of 250 rioting people hurling objects after a woman received a ticket on Thursday for wearing a full-face veil in a public venue. Her husband reportedly tried to strangle the officer who wrote out the summons.

The veiled woman in question later contacted the Collective Against Islamophobia in France, claiming the officer in question had yanked her veil, and pushed her mother, who was with her at the time.

Six rioters were arrested that night. Five others were injured in the violence, including four police officers and a 14-year-old boy who suffered a serious injury to his eye.

Trash dumpsters were torched and a bus shelter was shattered by the rioters. Police used tear gas to break up the mob.

A gang of some 50 attackers hurled a gasoline firebomb at police, and some fired weapons, a police union official said.

Interior Minister Manuel Valls called for calm after the violence at Trappes, and pledged at a Muslim Iftar dinner breaking the daily Ramadan fast to stand against “all those who attack Muslim buildings or our compatriots of Muslim faith.”

But speaking to reporters later in Marseille, he was equally firm about the need for peace, and said bluntly, “There is no valid reason for the violence seen in Trappes. The law should be applied, and applies to everyone.”

At least five people were injured, including four police officers, when a mob rioted in a Paris suburb over enforcement of the ban on full-face veils in France. 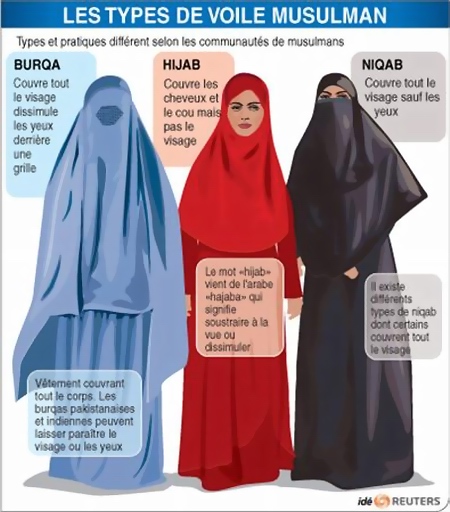 Six were detained in the violence that struck the small town in Trappes Friday night, as 250 rioters hurled rocks at police, about 17 miles west of Paris.

A bus shelter was shattered and a number of trash bins were torched, setting flames rising to the sky. A 14-year-old boy was hit in the eye by one of the flying objects in the melee, and suffered a serious injury as a result.

Officers responded with crowd control measures that included the use of tear gas.

The violence was ignited following a protest over the arrest of a man whose wife had received a ticket on Thursday for wearing a full-face veil, in violation of French law.

In response, her husband attempted to strangle the officer who was issuing the ticket, a prosecutor told reporters.

Such tickets carry small fines or citizenship classes for the women who wear the veils, banned since 2011. In addition, the law carries a 30,000 euro fine for anyone (husband or Islamic cleric) or who forces a woman to wear one.

In addition to the ban on veils, France also bars head scarves in schools and public buildings, which affects observant Jewish women as well, many of whom also cover their hair with scarves.

Local town official Erard Cordin de Mangoux told Sky News, “The police forces will remain in position for as long as necessary, not as provocation but for reasons of security, to give the 30,000 Trappes residents a sense of security and serenity,” he said.

In Case You Missed It:  President Trump Releases EXPLOSIVE Message: “The Fraudulent Presidential Election of 2020 will be, From this day forth, Known as THE BIG LIE!”
Posted in Terrorism and tagged Crime, France, Freedom, Islam, Jihad, Muslims, Terrorism.

A Backdoor Path to Amnesty?

Members of Congress have debated various versions of the DREAM Act more than 30 times over the past dozen years....