Black-on-black crime is a sensitive subject in this increasingly polarized nation. While covered in academia and occasionally addressed by talking heads on television, some believe it rarely, if ever, receives the type and depth of attention it deserves. Instead, critics argue that this national tragedy is usually swept under the rug by powerful interest groups and individuals more concerned with elevating their own racially-driven agendas than addressing the real issues at hand. The Trayvon Martin case is only the most recent example of this grim hypocrisy. 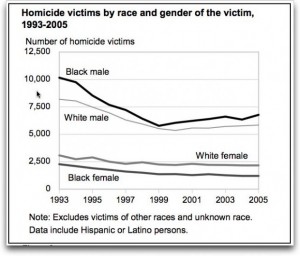 Indeed, statistics support a very different narrative than the one usually offered by “race hustlers,” as Pastor C.L. Bryant calls them, who routinely portray an America where members of the black community are selectively targeted and brutalized by white racists.

A 2007 special report released by the Bureau of Justice Statistics, reveals that approximately 8,000 — and, in certain years, as many as 9,000 African Americans are murdered annually in the United States. This chilling figure is accompanied by another equally sobering fact, that 93% of these murders are in fact perpetrated by other blacks. The analysis, supported by FBI records, finds that in 2005 alone, for example, African Americans accounted for 49% of all homicide victims in the US — again, almost exclusively at the hands of other African Americans.

To put these number in perspective, recall that over 6,400 U.S. service men and women have been killed in Iraq and Afghanistan combined over the course of a decade-long war fought in those nations. During the Vietnam War, which lasted nearly 13 years, some 58,000 Americans were killed — nearly 13 percent of whom were African American.

Extrapolating black-on-black crime data reveals that, by comparison, approximately 100,000 African Americans have been killed on our own streets at the hands of other African Americans in roughly the same stretches of time. It is difficult to find anyone who would white-wash these mind-numbing statistics.

Equally as startling, the same study reveals African Americans were victims of an estimated 805,000 nonfatal violent crimes in just one year alone.

While fatalities persist in every major metropolitan area across the nation, there are of course certain cities most impacted by violent crime. Take Cincinnati, for example, where, after the fatal shooting of a young black man by a white police officer in 2001, a wave of riots ensued. Since that time, Cincinnati has set the record for the number of murders carried out each year, with a persistent violent crime rate at a staggering 88 percent.

The now all-too-familiar statistics reveal that black males are killed far more often than any other demographic: “The vast majority of people being murdered are African American in the City of Cincinnati,” said Hamilton County Prosecutor, Joe Deters in an interview.

“The vast majority. Well outside the 40 percent of the population it should be. In 2009, the City of Cincinnati did not have a single white victim of a homicide. (That) tells me that we have a subset in the underclass of Cincinnati which is committing a lot of violent crime and they tend to be black. And the reality is, you almost always commit murder within your racial classifications. So when we’ve got a young black man up in the coroners office, it’s almost always a result of another young black man shooting him.”

That same year, 2009, no white men were killed in Cincinnati, but 44 black males and 11 females were the victims of homicide in the city.

One city that has perennially come under fire for racially charged violence is Chicago. In just the span of three days alone — March 16th-19th of this year — 41 people, mostly African-American, were shot and killed in Chicago. Ten were killed in President Obama’s former neighborhood. Incredibly, these atrocities on our very own streets barely received a turn of the head by activists, nor did they receive any media coverage.

In response to President Obama’s decision to raise the profile of the Trayvon Martin case, T. Willard Fair, president of the Urban League of Greater Miami, recently told The Daily Caller that the “the outrage should be about us killing each other, about black-on-black crime.”

He asked rhetorically, “Wouldn’t you think to have 41 people shot [in Chicago] between Friday morning and Monday morning would be much more newsworthy and deserve much more outrage?”

More than 500 people under the age of 21 were killed in Chicago in 2008. This figure fell only slightly in 2009 and 2010 and, of course, does not represent the many others who have been shot or injured as a result of these attacks. Records reveal that nearly 80 percent of youth homicides occurred in 22 black or Latino communities on Chicago’s South and West sides.

In just the first three months of 2012, 109 people have already been murdered in the city of Chicago. So rampant are the killings in fact, that crime in the President’s adopted hometown was even the focus of an April 5th report featured on The O’Reilly Factor:

In the poignant words of one man interviewed for the segment, “We’ve got to stop referring to people as African-American, Hispanic-American.”

According to recent studies, Illinois isn’t the only state in the Midwest to see a marked rise in the number of African-American homicide victims over the course of just the past few years. A study conducted by the Washington D.C. based Violence Policy Center revealed that for the third time in the past five years, Missouri is vying for Cincinnati’s role, leading the nation in black on black violent crime.

Perhaps surprisingly, Wisconsin, too, is ranked as one of the top ten states with the highest percentage of black murder victims. Spanning the rest of the country, the other nine states found to have the highest murder rates among African-Americans include Michigan, Pennsylvania, Oklahoma, Louisiana, Indiana, Tennessee, Missouri, California and Nevada.

Where is the outrage?

Recently, The Blaze featured a report on Rep. Corrine Brown, who, after professing in an interview to care about “all the children” who fall victim to murder, could not remember the name of a little girl from her district who was murdered and then dumped into a Georgia landfill. While Brown fumbled to find the words, she ultimately could not recall Somer Thompson’s name. She did, however, have much to say about racial profiling and how Trayvon Martin was selectively targeted for his race. For some reason, Brown and others who have followed suit in this case have failed to address or acknowledge the epidemic of murders occurring within their very own communities.

But Brown is not alone. Not by any stretch. Which begs the questions: where is the outrage from prominent members of the African-American community? Where are the words of condemnation and sorrow from Rep. Sheila Jackson Lee, or Rev. Al Sharpton, over the fact that members of their own communities are summarily executing each other? Critics believe that acknowledging the unfortunate, irrefutable statistical truth negates the left’s narrative about a black community selectively exploited and targeted by white racists. Some might also argue that fanning the flames of racial discontent, especially in an election year, serves a useful and powerful campaign purpose.

Thus far, hundreds of thousands of African Americans have been slaughtered at the hands of each other since the dawn of the Civil Rights movement. Is this the realization of Dr. King’s Community of Man?

In Case You Missed It:  “We Will Not Comply!” – Thousands March Against Covid Vaccine Mandates in NYC (VIDEO)
Posted in Tyranny and tagged Crime, Obama, Racism.

Detroit and the Bankruptcy of Liberalism

Detroit is a showcase for the liberal agenda — and now it is bankrupt. More than 50 years of control...