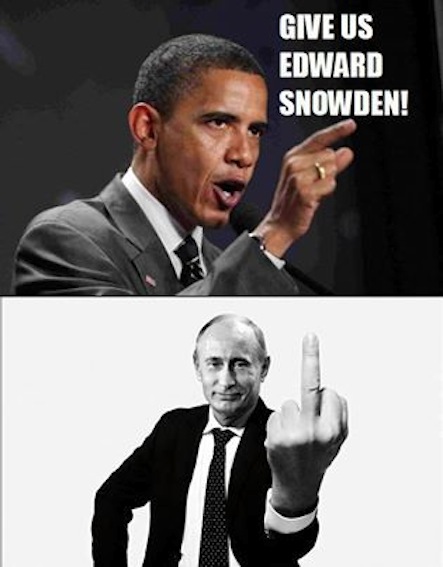 Ed Snowden told us that we were being spied upon. Everyone, outside the sheep in this country already knew that. Therefore, it is child’s play to conclude that Snowden has damning information which could threaten the survival of the Obama administration. And the fact that Putin controls Snowden’s information release, is a threat to this President. In the years I have been investigating the antics of this criminal government, this is the easiest dot connecting exercise that I have ever seen,

A Measure of Obama’s Desperation

In order to capture Snowden and silence him, Obama’s minions used rawforce in order to make the jet of the sitting President of Bolivia to land and then proceed to search the plane for Snowden. This was an unmitigated act of war and speaks to Obama’s desperation. As I have previously stated, I believe that it is likely that Michael Hastings had the same information and had to be eliminated. What  information, that if made public, could change the world and topple Obama? In order to answer that question, it is important to look at what has been the obvious goals of the Obama administration who serves the Federal Reserve with undying allegiance as well as look at recent events which are related.

1. The Petrodollar ponzi scheme is under extreme pressure as Iran has sold its oil for gold to China, Russian and India. This move is threatening to spread to other Arab nations. Therefore, the Arab Spring was needed to enforce Petrodollar compliance.

2. Obama was moving to attack Iran last fall, when the Chinese and Russians threatened to nuke the United States if we did so.

3. Then the US followed a backdoor plan to weaken Iran by taking down its closest ally, Syria. Our al-Qaeda forces in Syria are proving less formidable than Obama had hoped.

4. The US people are war weary and would not likely support another war.  Only a clever and horrific false flag attack which could fool the sheep, would turn the tide of public opinion in favor of going to war.

5. Snowden defects and eventually ends up in Russia. The importance of this event cannot be overstated.

6. Obama stops beating the war drums as loud against Syria and Iran because Putin is obviously blackmailing Obama with the release of Snowden’s information. The war drums have grown eerily silent haven’t they?

7. Michael Hastings is murdered. He obviously had some of Snowden’s evidence as he was in close contact with WikiLeaks as was Snowden. It becomes easy to believe that Hastings was going to be the conduit to release at least some of Snowden’s revelations. This was another desperate act by a desperate and determined President to stop Hastings from being as a big of a threat as Snowden. And if, as many have suggested, that Hastings was trying to get to the Israeli Consulate, Obama would have had two countries with blackmailing information to potentially use against him. Hastings should have known better.

8. The only thing that would cause such desperation among the Obama people to attack the Bolivian President and murder Hastings would be to cover up the fact that a false flag attack was discovered by Snowden and Hastings and Obama is trying to cover his tracks through a strategy of “dead men tell no tales.”

Putin has undoubtedly paralyzed this administration’s foreign policy because he controls the chessboard by controlling the release of Snowden’s information.

There are several events that I can point to which strongly suggests that Chicago could be the first option target of a false flag attack.

For individuals who think a false flag upon Chicago sounds crazy, ask yourself why Rahm Emanuel, most likely aSpy, would leave a high level cabinet post in the Obama Administration and step down to the relative lowly position of being a mayor of a city? The simple and obvious answer is was put in place to carry out the task of overseeing a false flag event, so big, so devastating, that the Obama Administration will have their pretext to execute martial law in order to stem the wave of massive protests which will surely accompany the globalist plans to have the United States commence a war in the Middle East. One dot is in place and will soon be connected to the second dot.

The mysterious death of Chicago activist, Jeff Joe Black, who claimed that Emanuel was put into place in Chicago to oversee a coming false flag event. Black, along with We Are Change Chicago who had organized a “block Emanuel election” which was based upon the fact that he was not a resident of the jurisdiction in which he was running.

Black wanted to come on my talk show and expose Emanuel’s agenda. Black, at the last minute, cancelled an appearance on my show and subsequently went into hiding and last fall he was murdered while in hiding.

In my mind, Black’s murder strongly validates the aforementioned assertions. Black had told me that we were going to witness Chicago becoming the site of a massive false flag operation which would be the catalyst for martial law. Black asserted that Chicago would experience a massive wave of house to house gun confiscations which would be conducted by foreign troops. It was Black’s contention that this was a lead up to the implementation of full-scale martial law and possible war.

Black’s assertions were not without merit. Black stressed to me that Emanuel would have control over law enforcement response to any emergency. His actions could exacerbate the effects of any attack. Certainly, in his role as the city’s chief executive, he would be in a position to thwart a meaningful investigation into a coming massive false flag attack in the critical early hours following the event. Emanuel has the power to turn off security cameras, control the placement of personnel and provide a context of plausible deniability for the Obama administration if such an attack were to occur. I only know that if I lived in Chicago and I knew that Emanuel was going to be out of the city for a few days, I would be very nervous. The first and second dot have been connected.

The Third Dot
If a false flag operation was in the works for Chicago resulting in the roll out of martial law, wouldn’t the globalists beta test the plan? I believe that is what happened in May of 2012 at the NATO summit as South Chicago.

To accurately add fuel to this false flag fire, there were plans in place for a mass evacuation of downtown Chicago in reaction to possible riots which might have taken place from May 20-21, 2012 at the NATO Summit. South Chicago was under martial law during these two days. Local officials were asked to make plans in order to assist Chicago residents in the event of a mass exit from Chicago. This Chicago NATO Summit was merely a Beta test for the real event. The third dot has been connected to the first and the second dot.

Judge a man by what he does, not what he says.

It is apparent that a similar warning has already been issued to key people from Chicago so that they can stay out of harm’s way. Unless you are a coincidence theorist, does anyone else find it interesting and care to speculate on why President Obama is not planning to return to his former hometown of Chicago in 2016? In case you have not heard, Obama is in the middle of securing a residence in Hawaii while disposing of his Hyde Park properties in Chicago. Why? What does he know that the rest of us do not? The fourth dot has been connected to the first three dots.

The Fifth Dot
About the time that Snowden defected, do any of the coincidence theorists find it interesting that the IRS scandal, the AP spy scandal, the return of new facts Benghazi occurred and then there was media hype of Snowden’s revelations that we were being spied upon (yawn). What are the odds that there were five “Watergates” released in one short period of time? I will tell why this was orchestrated, Obama is under pressure to resolve the Petrodollar crisis and save the Federal Reserve.

It is quite obvious that these scandals were put into play by impatient banksters who are demanding results from this President. I think it is possible that if Obama does not resolve the oil crisis in the Middle East, the banksters will facilitate a Watergate demise directed against this President. The first dot connects the other four dots together and explains the erratic and reckless behavior by committing an act of war against Bolivia and murdering Michael Stevens. Obama is fighting for his life. The fifth dot has been connected to the other four.

The Sixth Dot
As long as Putin controls Snowden, he can paralyze the most powerful military in the world. Time is running out for Obama. He can no longer silence Snowden the way he did Hastings. Therefore, what option does Obama have? If he goes to war with Russia, he would be betting that Snowden’s revelations, coming out from our Russian enemy, would not be listened to by the sheep in our country because we’d be at war with Russia.

Obama needs a war, not just to appease the Federal Reserve. He needs a war for his presidency to survive until 2016. But with war weary Americans, the only action that could jolt the US out of its fluoride and psychotropic drug induced stupors, would be a horrific false flag attack. The sixth dot has been connected.

The Seventh Dot
Have you bought your present? An important birthday is coming up. On December 23, 2013, the Federal Reserve turns 100 years of age and their charter is up for renewal, or not.

To catch a criminal, you have to think like a criminal. If I were as evil and as desperate as this President and I needed a war to save my backside, I would have to launch a false flag attack and blame my intended victim. This would allow me to suppress any resistance to the coming war and once and for all get rid of the Constitution that gets in my way.

There is still another compelling reason to launch a false flag attack. How many people know that the Federal Reserve is not truly federal? Maybe that number would be around 20% of the country. How many people know just how evil this organization is? May about 10% have this understanding. Do you believe that the banksters would want a catalyst event, such as the intense talk show debates that would ensue related to rechartering the FED? This is exposure the FED cannot risk. If the alternative media were to be the purveyors of this information, 50-60% of the country would wake up and rally against the abolition of the Fed. The powers that be can’t have people asking questions. By going under martial law, the people cannot lobby to get rid of the Fed on its birthday.

It is clear that we are going to be under full blown martial law after a false flag attack. The country will be ushered into war and the Federal Reserve will reign for another 100 years.The dots are connected. Long live the Queen.

In Case You Missed It:  Horrified patient says doctors left a breathing tube in his body for 30 years
Posted in Freedoms, Tyranny and tagged Chicago, Freedom, Obama, Russia, Vladimir Putin.

Can Obamacare Get the Young Blood It Needs to Live?

What would it take to get you to enroll in Obamacare? A folksy song? A celebrity endorsement? An ad in...