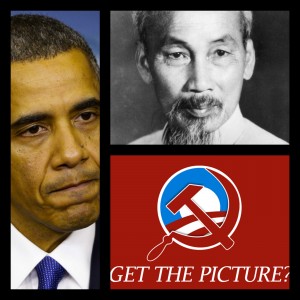 “And we discussed the fact that Ho Chi Minh was actually inspired by the U.S. Declaration of Independence and Constitution, and the words of Thomas Jefferson. Ho Chi Minh talks about his interest in cooperation with the United States,” Obama said. “And President Sang indicated that even if it’s 67 years later, it’s good that we’re still making progress.”

Obama said their first bilateral meeting “represents the steady progression and strengthening of the relationship between our two countries,” Bridget Johnson reported.

“Obviously, we all recognize the extraordinarily complex history between the United States and Vietnam,” Obama said. “Step by step, what we have been able to establish is a degree of mutual respect and trust that has allowed us now to announce a comprehensive partnership between our two countries that will allow even greater cooperation on a whole range of issues from trade and commerce to military-to-military cooperation, to multilateral work on issues like disaster relief, to scientific and educational exchanges.”

According to Obama, the visit by Sang “signifies the maturing and the next stage of the development between the United States and Vietnam.”

Sang reportedly offered Obama a gift — a “copy of a letter sent by Ho Chi Minh to Harry Truman,” and described the meeting as “very candid, open, useful and constructive,” The Blaze said.

Meredith Jessup wondered if Obama knew why the U.S. fought in the Vietnam War in the first place.

She also asked if Thomas Jefferson would have “approved of Minh’s policy of isolation which left hundreds of thousands of Vietnamese to starve to death?”

Breitbart.com’s Joel B. Pollack had even harsher words.

“Obama’s gesture is the latest example of his complete disdain for a) the idea of American exceptionalism; b) the principles of human rights, which have taken a back seat during his administration; c) the families of tens of thousands of Americans and Vietnamese who fought and died, albeit for an ultimately doomed cause,” he wrote.

Pollack went on to say that Obama’s praise was a “pathological form of moral relativism.”

USA Today said Obama and Sang had a “candid conversation” about human rights.

The meeting attracted hundreds of bullhorn-wielding, sign-holding protesters to Lafayette Park, across the street from the White House and stirred memories of the divisive Vietnam War, USA Today added.

In Case You Missed It:  If You Are Vaccinated and You Fear the Un-Vaccinated, You Might Be a Moron
Posted in Tyranny and tagged Communism, Obama.

(Free Republic)   A new poll by NBC News and the Wall Street Journal reveals that public perceptions about race...