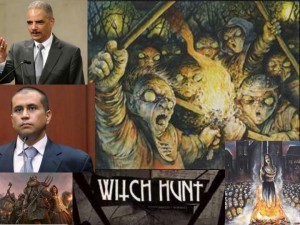 One more outrageous aspects of the press’s negligent coverage of the circumstances surrounding the Trayvon Martin-George Zimmerman confrontation is its insistence on describing Martin as having bought “Skittles and iced tea” at a convenience store roughly 40 minutes before Zimmerman, as a neighborhood watch volunteer, spotted him. The drink was not “iced tea”, and then there’s the issue of the candy and the iced tea.

Now we were told that Trayvon again, an innocent child, simply went to the store to buy some candy and some iced tea. But it wasn’t just any candy, and it wasn’t iced tea. It was Skittles candy, and a drink called Arizona Watermelon Fruit Juice Cocktail.

If you take Arizona Watermelon Fruit Juice Cocktail, a bag of Skittles, and add simple cough syrup, you get a cheap, codeine-based drink called “lean.”

Now there’s an entire online subculture devoted to the use of “lean,” which Trayvon was familiar with. We have screen grabs of him trying to score some codeine online, and instead being told he could make some “fire-ass lean” using cough syrup, skittles, and Arizona Watermelon Fruit Juice Cocktail. Seems a bit of a coincidence to me that the only two items he picked up out of the entire 7-11 were two-thirds of the ingredients needed to make “lean.”

Now additionally, we have a report from his autopsy that revealed a form of liver damage in this otherwise healthy young man just a few days short of 18 that are consistent with the kind of trauma that excessive “lean” usage does to an otherwise healthy liver.

Watch Bill Whittle’s latest “Afterburner” compares the recent Central Florida murder trial to a lynching — but not of Trayvon Martin as the media, politicians and liberal pundits would have us believe, but rather the much-maligned George Zimmerman.

In Case You Missed It:  Former EcoHealth VP and Whistleblower Andrew Huff: US Govt. Is Trying to Cover Up Origins of COVID-19 Because Dr. Fauci and US Were Funding Wuhan Lab’s Gain of Function Research (VIDEO)
Posted in Freedoms, Tyranny and tagged Florida, Freedom, Liberalism, media, Obama.