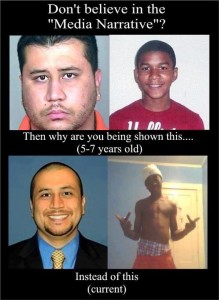 Lean is a concoction made from certain prescription cough syrups and a beverage medium, often made more palatable with candy like Skittles.

One of the recipes for “lean” calls for using Arizona Iced Tea Co.watermelon fruit juice cocktail as the beverage of choice, and Skittles candy… the items found on Trayvon Martin’s body the night he was shot by George Zimmerman.

The Conservative Treehouse has a lengthy post about the recreational drug, it’s effects and side effects, and screen captures of Trayvon Martin’s social media sites discussing his fondness for the concoction.

What is odd that the mainstream media and the Martin family attorney Benjamin Crump described the drink as iced tea when it clearly says “watermelon fruit juice cocktail” on the can. Was that an honest mistake, or purposeful deception in an attempt to hide Trayvon’s drug use?

Trayvon’s medical records and the medical examiner’s review of his body showed damage to his liver, a side effect to drug usage of lean.  If he used the drug frequently and in a concentrated enough form, it  explains his apparent confusion at the convenience store that night, the odd behavior that spurred George Zimmerman to call Sanford police, and the aggression he displayed when he fought with Zimmerman and attacked him.

House Cloakroom: July 29 – August 2 Analysis: This week, the House will be in session for four days before...