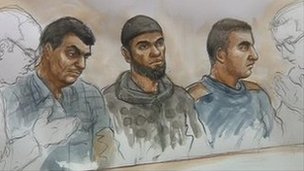 Aabidali Mubarak Ali, Rakib Iacub and Wajid Usman deny all of the charges

A child prostitution trial has heard that “other Sikh girls” were involved with men who paid a 16-year-old girl for sex.The girl told police she had been selling sex after she found out other girls were being “spoken to” by the men, Leicester Crown Court heard.

Three men from Leicester are on trial accused of sexual offences against her. Aabidali Mubarak Ali, 39, Rakib Iacub, 20, and Wajid Usman, 22, deny all of the 22 charges.

Three other men have already pleaded guilty to related charges.

‘Not the only girl’

In a police interview played to jurors, the girl said other Sikh people in Leicester had approached her family with concerns their daughters might be “in the same situation”. She told police: “I’ve been told I’m not the only girl. There are other Sikh girls.” She added that it worried her that other girls could be involved. The girl told police that she needed to make money because she wanted to leave home after her parents threatened to kick her out.

Jurors have heard that the girl had already been having sex with friends for money before she met the men. The men would pick her up from college, the court heard, and take her to various locations where she was paid up to £30 for sex. Opening the case for the prosecution, barrister Matthew Lowe described her as “very damaged and vulnerable”.

She abused alcohol and smoked cannabis, he said, and had a problematic relationship with her parents. She told police: “They [the men] knew why I drank, because it eases my sorrow.” She was told money was no problem and promised shopping trips and holidays, jurors heard.All three defendants on trial are accused of paying for sex with the 16-year-old. Mr Ali, of Guthlaxton Street, and Mr Iacub, of Maynard Road, are also accused of facilitating child prostitution, and trafficking the girl by taking her to various locations and introducing her to other men.  Mr Usman, of East Park Road, is also accused of inciting child pornography.

In Case You Missed It:  COVID IS JUST THE EXCUSE: Governments to demand constant surveillance of your blood, body fluids and medication compliance
Posted in Freedoms, Terrorism and tagged Islam, kuffar, prostitution, Sex, UK Muslims.