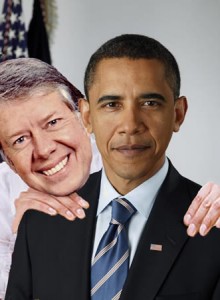 Vague terrorist threats shutting down nineteen of our embassies, Russian strongman Putin thumbing his nose at President Obama, Iran jerking our chain – the U.S. hasn’t looked this cowardly on the world stage since the Jimmy Carter administration.

Here at home, too, we’ve gone back to the Carter future; unemployment is high, Keynesian economics are all the rage, our professorial president is increasingly whiny and ineffectual; all that’s missing is a cardigan sweater and that infernal violin.

Our recent contre-temps with Russia is a throw-back to the weak-kneed Carter era. President Vladimir Putin has granted temporary asylum to NSA leaker and fugitive Edward Snowden, despite frantic efforts by the White House to take him into custody.

Mr. Obama is said to be livid; after all, he has pursued a chummy relationship with Putin for years.

The similarities between Obama and Carter are not confined to foreign fiascos.

At one point his eagerness translated into a seeming breach of faith with his own country, when he was caught on tape promising Putin (via his former number two Dmitri Medvedev) even greater accommodation on missile defense once reelected. Apparently the numerous earlier rebuffs from the Russian bully – on Iran, on missile defense, on Syria etc. — made no impression; Obama is ever hopeful.

Jimmy Carter was also unprepared to deal with Russia. NATO allies, worried about the Soviet deployment of longer-range, more capable SS-20 missiles in Europe beginning in 1976, pushed Carter to counter with U.S. cruise and Pershing missiles, to maintain strategic parity.

When Carter and Brezhnev met to sign Salt II, Carter whiffed; not only did he fail to win any agreement on the SS-20s, he never even broached the NATO demands.

Helmut Schmidt, who had spearheaded the strategy, was furious. Later, he described Jimmy Carter’s profound ignorance (and improbable optimism) about the Soviet Union: “He wasn’t aware that the Russians don’t know and never have known citizen’s rights,” the former German chancellor wrote.

In 1980, President Carter asked the Senate to discontinue consideration of the Salt II treaty in response to the Soviet invasion of Afghanistan, a stunning rebuke to U.S. interests. The same year, he ordered a boycott of the Moscow Olympics.

Both Carter and Obama came to office convinced that by dint of righteousness or personality they could win over our enemies. That it was just a matter of persuasion. 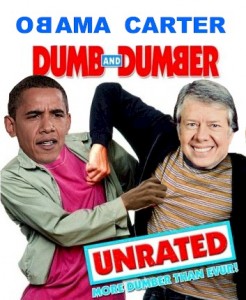 President George W. Bush is widely scorned these days for attempting to export democracy to the peoples of other lands; Mr. Obama, like Carter before him, has sought kindness and justice from the likes of Hugo Chavez and Bashar-Al-Assad. Which is more naïve?

Naivete is costly. Both the Carter and Obama administrations have been distinguished by the rare murder of an ambassador.

Even before the Iran hostage crisis that came to symbolize the failures of his presidency, Jimmy Carter was “shocked and saddened” when the Russians, along with Afghan security forces, killed Adolph Dubs, the U.S. ambassador to Afghanistan.

On Obama’s watch, of course, we lost Christopher Stevens, ambassador to Libya and three others; the president called it a “shocking attack.”

In both cases, critics charged the White House with incompetence and carelessness for not protecting our own.

Iran has proved a testing ground for both Carter and Obama, as the despots leading that country took the measure of U.S. leadership and found it wanting.

Under Carter, Iran took 52 U.S. citizens hostage in one of our country’s most humiliating chapters.

More recently, Iran’s former president Ahmadinejad has continued to publicly spurn Obama’s efforts to rein in that country’s nuclear ambitions, at times driving a wedge between the U.S. and ally Israel.

Obama’s lack of response to the mass slaughter in Syria and scrambled interactions with Egypt harks back to Carter’s impotence in the face of the 1979 OPEC oil embargo.

In Egypt today, the United States is ignored by both Islamist supporters of now-deposed President Morsi and also by the military; we are blamed by both sides for the chaos in that country. That’s quite an accomplishment, given the enormous aid we have ladled out to Egypt for decades. Unimaginably, it is EU foreign policy chief Cathy Ashton who is attempting to mediate between the two factions.

The parallels between the Carter and Obama presidencies are not accidental. Both men were elected in what amounted to a national rejection of their predecessors.

Neither candidate had any significant executive experience or foreign policy chops.

Carter ran on being an honest man – not Tricky Dick Nixon. Obama ran on being likeable and eager to unite the country – not arrogant and divisive George W. Bush.

Both men promised change, and fulfilled that promise. Unhappily, they did not always deliver change for the better.

The similarities between Obama and Carter are not confined to foreign fiascos.

Domestically, both have struggled to ignite growth and lower unemployment; both have clung to a profound belief in the powers of deficit spending and efficacy of federal meddling.

Faced with soaring inflation, Carter imposed price controls that caused rampant confusion and slowed growth; he also introduced gasoline rationing that led the country to quite literally run out of gas.

The same urge to tinker bedevils Obama, who cannot understand why consumers do not line up to buy the electric cars that he has required Detroit to manufacture, or why bankrolling uncompetitive “green” energy companies are bets that go bad.

Instead of searching for private market resolutions to problems like soaring medical costs, Obama chose to funnel even more of the economy through the federal spigot. Who today believes that ObamaCare is the best possible answer to reining in the cost of healthcare?

One of the few divides between the Obama presidency and that of Jimmy Carter is that Mr. Obama won reelection. Pity.