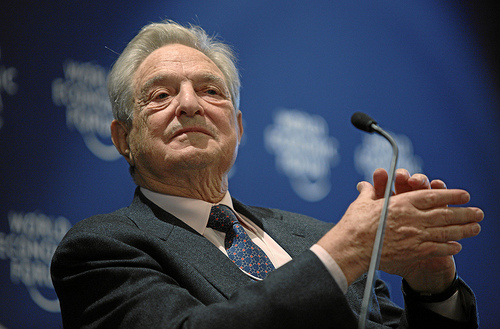 Billionaire George Soros’ philanthropy is bad news for Israel, according to an in-depth report from the NGO-Monitor watchdog group.

The report listed the many causes in Israel, or pertaining to Israel, that are funded by Soros’ Open Society Foundations.

Among the top beneficiaries of OSF funding is Human Rights Watch, which has been criticized for targeting for criticism, and falsely libeling, the state of Israel. Another is J Street, which describes itself as “pro-Israel” but has been termed anti-Israel by others for, among other things, welcoming proponents of a boycott on Israel at its national conference and honoring IDF soldiers who refused orders.

Another recipient of OSF funding is the Institute for Middle East Understanding, which, NGO-Monitor reports, is headed by staff who have accused Israel of war crimes and have termed Israel an “apartheid state.”

Among the Israeli recipients is Adalah, which promotes the so-called “right of return” to Israel, which would allow millions of descendants of Arabs who fled Israel during the War of Independence to claim Israel as their home.

OSF also funds Al Haq, an Arab organization based in the Palestinian Authority-controlled city of Ramallah, north of Jerusalem. NGO-Monitor’s researchers described Al-Haq director Shawan Jabarin as “a human rights campaigner by day and a terrorist by night,” who is among the senior members of the PFLP terrorist group.

The extreme-left Israeli group B’Tselem also receives OSF funds. B’Tselem is notorious for publishing one-sided reports, and for inflating Arab civilian casualty figures. For example, the group included hundreds of Hamas policemen in Gaza as “non-combatants,” and counted Sheikh Ahmed Yassin – then the leader of Hamas – as not a definite combatant.

B’Tselem has listed OSF as a source of support, but OSF has not listed B’Tselem as a recipient, indicating that the grant may have come through an overseas entity.

“There is no comparable focus by Soros family and OSF gifts or his foundation network on promoting democracy or economic development in Palestinian society, nor on surrounding Arab societies,” it added.

NGO-Monitor called on Soros philanthropies to implement transparency regarding overseas grants, and to ensure that beneficiaries “act in strict accordance with universal moral principles by abstaining from the promotion of totalitarian regimes, such as in Iran, as well as from participating in demonization of Israel through the exploitation of the language of human rights.”

The group noted that there is no indication that George Soros himself or his family are hostile to Israel, despite frequent criticism of Israeli policy.