Mark Langfan, Chairman of Americans for a Safe Israel, thinks Iran may be the culprit behind the 2012 attack on the U.S. Consulate in Benghazi that left the ambassador and three other Americans dead.

Langfan reacted to an investigative report by CNN‘s Jake Tapper that found that there were dozens of CIA agents at the Benghazi compound during the attack, and that CIA officers with knowledge of the case have been subjected to very frequent lie detector tests, apparently designed to make sure that they do not talk about what happened at Benghazi.

Tapper wrote that he has discovered that “dozens of people working for the CIA were on the ground that night, and that the agency is going to great lengths to make sure whatever it was doing, remains a secret.

“CNN has learned the CIA is involved in what one source calls an unprecedented attempt to keep the spy agency’s Benghazi secrets from ever leaking out,” he added. The lie-detector campaign “is being described as pure intimidation, with the threat that any unauthorized CIA employee who leaks information could face the end of his or her career.”

The Tapper report also cites speculation on Capitol Hill, which “has included the possibility the U.S. agencies operating in Benghazi were secretly helping to move surface-to-air missiles out of Libya, through Turkey, and into the hands of Syrian rebels.” 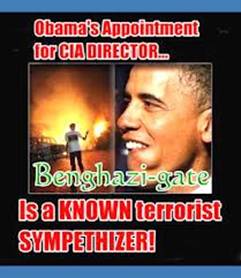 Langfan calls the Obama administration’s behavior in this matter “beyond inexplicable.” Furthermore, he notes that if, indeed, the CIA was involved in transferring weapons from Libya to Syrian rebels, it would made little sense for Al Qaeda to attack the CIA – since the Syrian rebels are largely identified with Al Qaeda, and they would be the ones benefiting from the gun running.

In an Arutz Sheva op-ed, Langfan opined that the Benghazi scandal could turn into a Watergate-sized scandal.

The CIA’s outgoing deputy head, Michael Morell Agency, said in an interview published Wednesday that the Syrian civil war is now the greatest threat to U.S. national security. The risk, says Morell, is that the Syrian government might collapse and the country would becomes al Qaeda’s new safe haven, supplanting Pakistan.