Radical Islamic organization Al Shabaab, Al Qaeda’s branch in Somalia, is producing a series of documentary videos about jihadist warriors who came from the U.S. to fight against “infidel forces.” 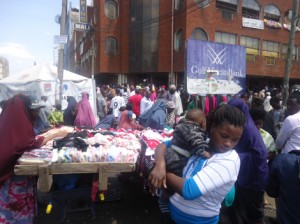 One of the videos brings the story of two young Americans who came from Minnesota, joined jihadists in Somalia and were killed in the fighting there. One of them, who was named “Mohammed al-Amrikani,” converted to Islam, studied at Medina, in Saudi Arabia, and went from there to Somalia.

Mohammed al-Amrikani, who was also called Abd el-Rahman, said that living in Somalia is the best option for “Muslim believers.”

Abd el-Rahman said that Somalia is “like Disneyland,” and that the best food, the best dreams and the best friends can be found there. He recommended to all Muslims to join the mujahedeen, “disconnect from their urges and participate in defeating the unbelievers.”

Another American featured in the video in Mohammed Hassan, or Seif al-Din, who left Minnesota when he was a student. He joined Al Shabaab, underwent military training and fought in the Mogadishu sector. He was killed there, alongside Abd el-Rahman.

The narrator of the film explains that Islamists in Somalia do not view the war there as merely a fight with the West over a piece of land, but as a wider ideological struggle between “Islam and heresy.”

The video highlights what is becoming a growing concern for western nations: the radicalization of a portion of their own Muslim citizens both at home and on foreign battlefields including not only Somalia, but Syria as well.

“We’re losing the country,” a Maryland man said at a town hall meeting. “I want to see more defiance!” He...