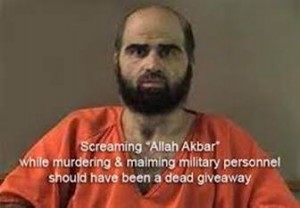 On December 7, 1941, the U.S. naval base at Pearl Harbor was attacked. Three years, eight months, and eight days later, the Japanese surrendered. These days, America’s military moves at a more leisurely pace. On November 5, 2009, another U.S. base, Fort Hood, was attacked — by one man standing on a table, screaming “Allahu akbar!” and opening fire. Three years, nine months, and one day later, his court-martial finally got under way.

The intervening third-of-a-decade-and-more has apparently been taken up by such vital legal questions as the fullness of beard Major Hasan is permitted to sport in court. This is not a joke: See “Judge Ousted in Fort Hood Shooting Case amid Beard Debacle” (CBS News). Army regulations require soldiers to be clean-shaven. The judge, Colonel Gregory Gross, ruled Hasan’s beard in contempt, fined him $1,000, and said he would be forcibly shaved if he showed up that hirsute next time. At which point Hasan went to the U.S. Court of Appeals for the Armed Forces, which ruled that Colonel Gross’s pogonophobia raised questions about his impartiality, and removed him. He’s the first judge in the history of American jurisprudence to be kicked off a trial because of a “beard debacle.” The new judge, Colonel Tara Osborn, agreed that Hasan’s beard was a violation of regulations, but “said she won’t hold it against him.”

The U.S. Army seems disinclined to hold anything against him, especially the 13 corpses plus an unborn baby. Major Hasan fired his lawyers, presumably because they were trying to get him off — on the grounds that he’d had a Twinkie beforehand, or his beard don’t fit so you must acquit, or some such. As a self-respecting jihadist, Major Hasan quite reasonably resented being portrayed as just another all-American loon gone postal. So he sacked his defense team, only to have the court appoint a standby defense team just in case there were any arcane precedents and obscure case law he needed clarification on. I know that’s the way your big-time F. Lee Bailey types would play it, but it doesn’t seem to be Major Hasan’s style. On the very first day of the trial, he stood up and told the jury that “the evidence will clearly show that I am the shooter.” Later, in one of his few courtroom interventions, he insisted that it be put on the record that “the alleged murder weapon” was, in fact, his. The trial then came to a halt when the standby defense team objected to the judge that Major Hasan’s defense strategy (yes, I did it; gimme a blindfold, cigarette, and tell the virgins here I come) would result in his conviction and execution.

Major Hasan is a Virginia-born army psychiatrist and a recipient of the Pentagon’s Global War on Terrorism Service Medal, which seems fair enough, since he certainly served in it, albeit for the other side. Most Americans think he’s nuts. He thinks Americans are nuts. It’s a closer call than you’d think. In the immediate aftermath of his attack, the U.S. media, following their iron-clad rule that “Allahu akbar” is Arabic for “Nothing to see here,” did their best to pass off Major Hasan as the first known victim of pre-Post-Traumatic Stress Disorder. “It comes at a time when the stress of combat has affected so many soldiers,” fretted Andrew Bast in a report the now defunct Newsweek headlined, “A Symptom of a Military on the Brink.”

Major Hasan has never been in combat. He is not, in fact, a soldier. He is a shrink. The soldiers in this story are the victims, some 45 of them. And the only reason a doctor can gun down nearly four dozen trained warriors (he was eventually interrupted by a civilian police officer, Sergeant Kimberly Munley, with a 9mm Beretta) is that soldiers on base are forbidden from carrying weapons. That’s to say, under a 1993 directive a U.S. military base is effectively a gun-free zone, just like a Connecticut grade school. That’s a useful tip: If you’re mentally ill and looking to shoot up a movie theater at the next Batman premiere, try the local barracks — there’s less chance of anyone firing back.

Maybe this Clinton-era directive merits reconsideration in the wake of Fort Hood? Don’t be ridiculous. Instead, nine months after Major Hasan’s killing spree, the Department of Defense put into place “a series of procedural and policy changes that focus on identifying, responding to, and preventing potential workplace violence.”

Major Hasan says he’s a soldier for the Taliban. Maybe if the Pentagon were to reclassify the entire Afghan theater as an unusually prolonged outburst of “workplace violence,” we wouldn’t have to worry about obsolescent concepts such as “victory” and “defeat.” The important thing is that the U.S. Army’s “workplace violence” is diverse. After Major Hasan’s pre-post-traumatic workplace wobbly, General George W. Casey Jr., the Army’s chief of staff, was at pains to assure us that it could have been a whole lot worse: “What happened at Fort Hood was a tragedy, but I believe it would be an even greater tragedy if our diversity becomes a casualty.” And you can’t get much more diverse than letting your military personnel pick which side of the war they want to be on.

Like I said, we think he’s nuts; he thinks we’re nuts. Right now, there’s a petition on the Internet seeking to persuade the United States government to reclassify Hasan’s “workplace violence” as an act of terror. There are practical consequences to this: The victims, shot by an avowed enemy combatant in an act of war, are currently ineligible for Purple Hearts. The Pentagon insists the dead and wounded must be dishonored in death because to give them any awards for their sacrifice would prejudice Major Hasan’s trial and make it less likely that he could be convicted.

Hence, the Internet petition. Linking to it from their homepage, my colleagues at National Review Online promoted it with the tag: “Thirteen people lost their lives with dozens of others wounded. And now the man responsible wants to claim it was workplace violence.” 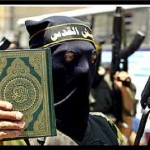 That’s not true — and actually it’s grossly unfair to Major Hasan. He’s admirably upfront about who and what he is — a “Soldier of Allah,” as he put on his business card. On Tuesday, he admitted he was a traitor who had crossed over from “the bad side” (America’s) to “the good side” (Islam’s). He has renounced his U.S. citizenship and its effete protections such as workplace-violence disability leave. He professes loyalty to America’s enemies. He says, “I am the shooter.” He helpfully informs us that that’s his gun. In this week’s one-minute statement, he spoke more honestly and made more sense than Obama, Gates, Casey, the Armed Forces Court of Appeals, two judges, the prosecution and defense lawyers, and mountains of bureaucratic reports and media coverage put together.

But poor old Hasan can say “Yup, I did it” all he wants; what does he know?

Unlike the Zimmerman trial, Major Hasan’s has not excited the attention of the media. Yet it is far more symbolic of the state of America than the Trayvon Martin case, in which superannuated race hucksters attempted to impose a half-century-old moth-eaten Klan hood on a guy who’s a virtual one-man melting pot. The response to Nidal Hasan helps explain why, in Afghanistan and elsewhere, this war is being lost — because it cannot be won because, increasingly, it cannot even be acknowledged. Which helps explain why it now takes the U.S. military longer to prosecute a case of “workplace violence” than it did to win World War Two.

Social Security Turns 78: What Was It Meant to Do?

When President Franklin D. Roosevelt signed Social Security into law on August 14, 1935, he referred to it as “a...