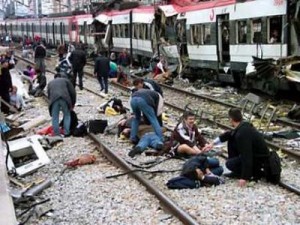 The Islamist group could plant explosives on trains and tunnels or sabotage tracks and electrical cabling, said Bild, Europe’s most widely read daily.

Bild said the information came from the National Security Agency (NSA) in the United States, which had listened in to a conference call involving top Al-Qaeda operatives.

The attacks on Europe’s rail network was a “central topic” of this call, Bild said.

Authorities in Germany have responded to the threat with discrete measures such as deploying plain-clothed police officers at key stations and on main routes, according to the daily.

According to US media reports, intelligence services intercepted a conference call earlier this month between Al-Qaeda leader Ayman al-Zawahiri and more than 20 operatives from across the group’s global network.

This prompted the US and several allies to shut embassies across the Muslim world, fearful of a major attack.

On August 1, the US issued a worldwide alert, warning of Al-Qaeda plans to launch an attack in the Middle East or North Africa.

Over 600 people were killed during the August 14-17 clashes between the Egyptian military and the Muslim Brotherhood. In the...