In May, I shared with you the details about 172 House members visiting over 90 countries and every continent except Antarctica in 2012 – all on your dime.  But members of the U.S. House of Representatives actually travel modestly compared to the VIP travel undertaken by Obama’s friends and appointees. 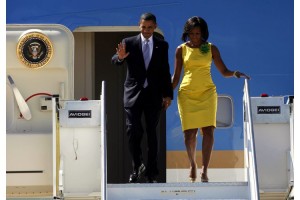 And of course, any travel review needs to start with the travel queen of the last four years, Hillary Clinton.

Hillary traveled at a record-setting pace, journeying 956,733 miles and setting foot in 112 countries. This adds up to 2,084 hours spent flying around the world, which is equivalent to 86 whole days spent aboard her government-issued luxury jetliner. And how do we know these facts? Because she likes to brag about them.

But when it comes to costs, your guess is as good as mine. Despite repeated Freedom of Information Act (FOIA) requests, her department refuses to come clean about how much this travel cost U.S. taxpayers.

Ironically, Obama’s “most transparent administration in history” works hard to hide the details of the luxurious globe-trotting. But thanks to some hard work by lawyers using the Freedom of Information Act, some other portions of the travel details are beginning to surface.

And That’s Only the Beginning…

It’s only proper that Attorney General Eric Holder tells us how much his travels cost, since he’s the federal officer in charge of FOIA compliance. While he hasn’t been too diligent about asking others to comply, he did comply himself – to some degree.

From his disclosures, we learned that during 2011, Holder filed 62 long-distant jaunts that cost us, at a minimum, $1.45 million. However, he refused to disclose flight costs for seven major trips out, including travels to China, Hawaii, and Brussels.

Holder’s travelling includes an April 2011 sojourn to Las Vegas, mixing business and personal travel, which totaled $46,358. Other “personal” trips, including visits to Martha’s Vineyard and Miami, cost us taxpayers a whopping $169,502.

And of course there’s Joe Biden. Today, we learned that the vice-president’s six-day trip to South America and the Caribbean included one 20-hour stop in Trinidad and Tobago that cost an astounding $245,000. As has become standard, the contract was awarded without “full and open competition” because of security and logistical concerns.

Yet the scariest part is that, while the travel for administration officials sounds expensive to those of us who pay our own bills while flying coach or driving on our summer trips, these Obama appointees don’t even hold a candle to Michelle and Barack.

First, there was Michelle Obama’s 2012 President’s Day weekend ski vacation to Aspen, Colorado with her two daughters. The total cost for the Aspen ski vacation was at least $83,182.99. The bill for the U.S. Secret Service, including accommodations at the Fasching Haus deluxe condominiums and the Inn at Aspen, came to $48,950.38. The cost for the flight, per official DOD published hourly rates, was $22,583.70.  Food and miscellaneous on-flight items cost $235.44. The cost for rental cars totaled $6,442.23.

But that’s nothing. A drop in the bucket. More importantly, there‘s the first family’s recent trip to Africa, which is alleged to have cost over 100 million dollars.

Security for the trip involved military cargo planes airlifting 56 support vehicles, including 14 limousines. Taxpayers even paid for three trucks to carry bulletproof glass (African trucks must not be up to the task) to cover the windows where the president stayed.

The sound of the cash register is probably sounding off in your mind as I keep giving you figures. Ka-ching, Ka-ching, Ka-ching. And these are only the figures that the governmental watchdog group Judicial Watch was able to obtain. The real cost of these trips was likely much higher.

So as you travel this summer, let’s not overlook the lavish lifestyles of our not-so-humble public servants who are also traveling on your dime.

This article originally appeared at CapitolHillDaily.com and is reprinted here

In Case You Missed It:  Joe Biden Pitches His Build Back Better Agenda in Scranton: “We Will Take, Literally, Millions of Automobiles off the Road. Off the Road” (VIDEO)
Posted in Financial, Tyranny and tagged Financial, Obama, United Socialist States of America.