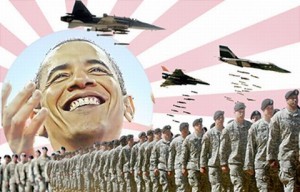 Obama’s war machine – it’s the biggest, the baddest, the bulliest in the history of America. And it appears ready to fire up even hotter.

Are we about to go to war in Syria? It would certainly seem so. Not a declared war, but one of those international police actions apparently intended to punish a bad actor on the world stage and to let everyone know that President Obama means it when he draws a red line.

Despite American public opinion that is overwhelmingly against military intervention in the Syria, despite strong warnings from Russia and China not to strike, despite the potential for eventual entanglements that could draw us deeper into another prolonged Middle East conflict, Obama’s war machine is gearing up. There’s serious talk of limited missile strikes into Syria because of the reported use of chemical weapons by the Assad regime. The Pentagon has moved US warships into the region, within striking distance.

So here we have a President who railed relentlessly against George W. Bush about getting us into ill-advised, “illegitimate” wars in Iraq and Afghanistan, a President now firing up his own war machine. Of course, we have to keep in mind that Obama, with all his drone strikes into Pakistan and Yemen, has never really turned the machine off.

But the impending Syrian engagement is only the latest battle front for Barack Obama’s perpetual motion war machine. Since entering office, Obama has used conflict, hostility, antagonism and aggression to embroil America in a constant state of war. To cloud the country’s vision and create an atmosphere of uncertainty, uneasiness and doubt with a thick and never-ending fog of war. Obama’s chosen targets? Let’s name a few.

There’s his conflict with the states, the war against state sovereignty. Unleashing one of his main dogs of war – Attorney General Eric Holder – to go after voter ID laws – most recently in Texas. The war on the integrity of our electoral process. Related to this, the war on borders and immigration control, as Obama and his political foot soldiers march for amnesty for illegals.

There’s the President’s war on coal, on the development of American energy resources in general. His stand against offshore drilling, against fracking, against the Keystone Pipeline project. The higher energy costs part of the war on the middle class. Even as Obama claims to be fighting for us, he’s battling against us on multiple fronts. The war on middle class values – marriage, the traditional family, a wholesome cultural environment.

Or when it comes to religious beliefs regarding health care and what anyone should or should not have to agree to, support and pay for. Which raises the specter of Obama’s war on religion in general, what many see as his attack on Christianity in specific.

And then there’s the big war on the Constitution, on the rule of law, on the separation of powers, on the very belief that our rights – our essential, inalienable, natural rights – come from God and not from government.

Barack Obama is without a doubt the most ambitious and aggressive wartime president in the nation’s history. His inexorable war machine has been rolling across the land and over our lives since he first took the oath of office. Because, despite the rhetoric and the platitudes about being a healer, a uniter, a man of peace, Obama has proven himself to be a man of war – building on his political past as a professional agitator, a dissident, a troublemaker, a conflict instigator. His very nature, his soul purpose is to stir up and then tear down, in a relentless, calculated mission to divide and conquer.