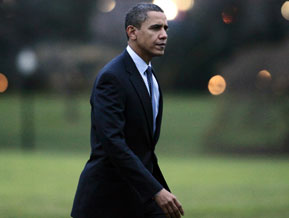 Having carelessly established a “red line” for intervening in the Syrian civil war without a clear strategy or appropriate course to protect U.S. interests, the President has now dumped the whole mess in the lap of Congress.

It is appropriate for the President to consult Congress, but he has a tall order in convincing many skeptical Members that he is doing the right thing.

To gain congressional authorization, the President must clearly articulate U.S. national interests in Syria and explain how these interests will be advanced. The President today restated his determination to enforce international norms against the use of chemical weapons in Syria. But there are many norms being violated in Syria on a daily basis: the use of tanks, artillery, SCUD missiles, and warplanes against civilian targets, to name a few.

The President must convince Congress why enforcing his chemical weapons “red line” is so important to advancing U.S. national interests, rather than merely useful for enforcing “international norms”—to which much of the rest of the world appears to have turned a blind eye. Symbolic, feel-good military gambits will accomplish little.

The President also must convince Congress that he has a coherent long-term strategy that will be advanced by military action in Syria. So far, the Administration has vacillated, backed into arming the Syrian opposition, and vainly sought a diplomatic solution working with Russia, which continues to back Assad to the hilt.

The Administration has ruled out regime change as a goal for its impending action. The costs and risks of such an effort greatly exceed the likely benefits, particularly since al-Qaeda and its Syrian supporters would be the principal beneficiaries of a sudden overthrow of Assad.

But military force is a blunt and bloody instrument for sending signals. Those signals may not have the desired consequences. If Assad brushes them off and continues his serial mass murders, then the Administration will look ineffective and irresolute. The Heritage Foundation’s James Jay Carafano has warned: “The Middle East would see this as another effort from the Obama Administration to look for an ‘easy button’ and lead from behind rather than exercise real, constructive leadership.”

If it hopes to gain congressional approval for military action, the Obama Administration urgently needs to develop and articulate a strategy not only to counter Assad’s use of chemical weapons but also to prevent those weapons from falling into the hands of al-Qaeda, Hezbollah, or other Islamist terrorist groups that have flocked to Syria.

Dreaming of Equality of Opportunity, Not Outcome

In the United States, dreams have a funny way of becoming reality. That’s what makes the American dream so powerful....