While U.S. leaders continue pushing for war against the Syrian government, today “Al-Qaeda-linked rebels,”reports AP, “launched an assault on a regime-held Christian mountain village in the densely populated west of Syria and new clashes erupted near the capital, Damascus, on Wednesday… In the attack on the village of Maaloula, rebels commandeered a mountaintop hotel and nearby caves and shelled the community below, said a nun, speaking by phone from a convent in the village. She spoke on condition of anonymity for fear of reprisals.” 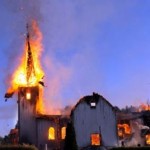 Arabic news agency Al Hadath gives more information concerning this latest terror attack on Syria’s Christians, specifically how the al-Qaeda linked rebels “terrorized the Christians, threatening to be avenged on them after the triumph of the revolution.”

Thus al-Qaeda terrorists eagerly await U.S. assistance against the Syrian government, so they can subjugate if not slaughter Syria’s Christians, secularists, and non-Muslims — even as the Obama administration tries to justify war on Syria by absurdly evoking the “human rights” of Syrians on the one hand, and lying about al-Qaeda’s presence in Syria on the other.

In Case You Missed It:  Only 2,500 Americans Reportedly Rescued this Week from Kabul Out of 17,000 Civilians – Pentagon Won’t Say Why US Soldiers Not Permitted to Leave Airport on Rescue Missions (VIDEO)
Posted in Tyranny and tagged al-Qaida, Obama, Sen John McCain, Syria, Terrorism, War.

Syrian government troops battled al-Qaida-linked rebels over a regime-held Christian village in western Syria for the second day Thursday, as...