The Syrian rebels posed casually, standing over their prisoners with firearms pointed down at the shirtless and terrified men. 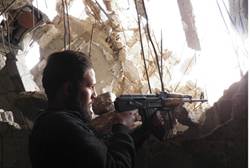 Syrian rebels are zeroing in on Assad

The prisoners, seven in all, were captured Syrian soldiers. Five were trussed, their backs marked with red welts. They kept their faces pressed to the dirt as the rebels’ commander recited a bitter revolutionary verse.

“For fifty years, they are companions to corruption,” he said. “We swear to the Lord of the Throne, that this is our oath: We will take revenge.”

The moment the poem ended, the commander, known as “the Uncle,” fired a bullet into the back of the first prisoner’s head. His gunmen followed suit, promptly killing all the men at their feet.

This scene, documented in a video smuggled out of Syria a few days ago by a former rebel who grew disgusted by the killings, offers a dark insight into how many rebels have adopted some of the same brutal and ruthless tactics as the regime they are trying to overthrow.

As the United States debates whether to support the Obama administration’s proposal that Syrian forces should be attacked for using chemical weapons against civilians, this video, shot in April, joins a growing body of evidence of an increasingly criminal environment populated by gangs of highwaymen, kidnappers and killers.

The video also offers a reminder of the foreign policy puzzle the United States faces in finding rebel allies as some members of Congress, including Senator John McCain, press for more robust military support for the opposition.

In the more than two years this civil war has carried on, a large part of the Syrian opposition has formed a loose command structure that has found support from several Arab nations, and, to a more limited degree, the West. Other elements of the opposition have assumed an extremist cast, and openly allied with Al Qaeda.

Across much of Syria, where rebels with Western support live and fight, areas outside of government influence have evolved into a complex guerrilla and criminal landscape.

That has raised the prospect that American military action could inadvertently strengthen Islamic extremists and criminals.

Abdul Samad Issa, 37, the rebel commander leading his fighters through the executions of the captured soldiers, illustrates that very risk.

Known in northern Syria as “the Uncle” because two of his deputies are his nephews, Mr. Issa leads a relatively unknown group of fewer than 300 fighters, one of his former aides said. The former aide, who smuggled the video out of Syria, is not being identified for security reasons.

A trader and livestock herder before the war, Mr. Issa formed a fighting group early in the uprising by using his own money to buy weapons and underwrite the fighters’ expenses.

His motivation, his former aide said, was just as the poem he recited said: revenge.

In Washington on Wednesday, Secretary of State John Kerry addressed the issue of radicalized rebels in an exchange with Representative Michael McCaul, a Texas Republican. Mr. Kerry insisted, “There is a real moderate opposition that exists.”

Mr. McCaul responded by saying he had been told in briefings that half of the opposition fighters were extremists.

Much of the concern among American officials has focused on two groups that acknowledge ties to Al Qaeda. These groups — the Nusra Front and the Islamic State in Iraq and Syria — have attracted foreign jihadis, used terrorist tactics and vowed to create a society in Syria ruled by their severe interpretation of Islamic law.

They have established a firm presence in parts of Aleppo and Idlib Provinces and in the northern provincial capital of Raqqa and in Deir al-Zour, to the east on the Iraqi border.

While the jihadis claim to be superior fighters, and have collaborated with secular Syrian rebels, some analysts and diplomats also note that they can appear less focused on toppling President Bashar al-Assad. Instead, they said, they focus more on establishing a zone of influence spanning Iraq’s Anbar Province and the desert eastern areas of Syria, and eventually establishing an Islamic territory under their administration.

Other areas are under more secular control, including the suburbs of Damascus. In East Ghouta, for example, the suburbs east of the capital where the chemical attack took place, jihadis are not dominant, according to people who live and work there.

And while the United States has said it seeks policies that would strengthen secular rebels and isolate extremists, the dynamic on the ground, as seen in the execution video from Idlib and in a spate of other documented crimes, is more complicated than a contest between secular and religious groups.

Mr. Issa’s father was opposed to President Hafez al-Assad, the father of Syria’s current president. He disappeared in 1982, according to Mr. Issa’s accounts.

Mr. Issa, the aide said, believes his father was killed during a 27-day government crackdown on the Muslim Brotherhood that year, known as the Hama massacre.

By the time he was a young man, Mr. Issa was vocally antigovernment and was arrested and imprisoned twice for a total of nine months, the aide said.

When the uprising against Bashar al-Assad started two and a half years ago, the family saw it as a means to try to settle old scores.

At first, people who know Mr. Issa said, he was a protester, and then he led fighters in small skirmishes. By last year he was running a training camp in the highlands near Turkey.

By this year, the aide said, he was gathering weapons from relatives and Arab businessmen he knew from his work as a trader and, at least once, from the Western-supported Supreme Military Council of the Free Syrian Army, the rebel forces.

(Two representatives of the military council declined to comment on the council’s military collaboration or logistical support for Mr. Issa’s group. Mr. Issa could not be reached for comment over two days this week.)

By the spring, his group had taken a resonant name: Jund al-Sham, which it shares with three international terrorist groups, and another group in Syria.

Its relationship — if any — with these other groups is not clear.

Mr. Issa’s former aide and two other men who have met or investigated him said he appears to assume identities of convenience.

But, they said, one of his tactics has been to promise to his fighters what he calls “the extermination” of Alawites — the minority Islamic sect to which the Assad family belongs, and which Mr. Issa blames for Syria’s suffering.

This sentiment may have driven Mr. Issa’s decision to execute his prisoners in the video, his former aide said. The soldiers had been captured when Mr. Issa’s fighters overran a government checkpoint north of Idlib in March.

Their cellphones, the former aide said, had videos of soldiers raping Syrian civilians and looting.

Mr. Issa declared them all criminals, he said, and a revolutionary trial was held. They were found guilty.

Mr. Issa, the former aide said, then arranged for their execution to be videotaped in April so he could show his work against Mr. Assad and his military to donors, and seek more financing.

The video ends abruptly after his fighters dump the soldiers’ broken bodies into a well.

One of the participants, a young man wearing a purple fleece jacket, looks into the camera and smiles.

In Case You Missed It:  Proof that the Taliban takeover was not Biden's incompetence But TREASON!
Posted in Terrorism and tagged Islam, Muslims, Syria, Terrorism.

What Do You Want to Know About Syria?

President Obama said last year that the use of chemical weapons in Syria was a “red line.” It wasn’t one...