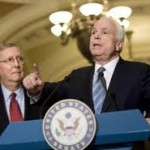 Many of Sen. John McCain’s constituents are not happy with the Arizona Republican’s support of President Barack Obama’s plan to take military action against Syria. Voters made that much perfectly clear when they confronted him at a town hall in Phoenix on Thursday.

A Syrian Christian woman at the Arizona town hall who has an 18-year-old cousin in Syria, said the U.S. had not pursued all routes of diplomacy.

“For me, to listen to you say there is no good option in Syria – I refuse to believe that…The good option right now is to take Saudi Arabia and Iran and force them to stop supporting the two sides in Syria. And you could do it. You can do it by diplomacy, not bombs, Sen. McCain. We cannot afford to shed more Syrian blood,” she said.

She went on to say the rebels that McCain and Obama support are not Syrians, and have links to terrorist organizations like Al Queda.  McCains response to her was that he has traveled to Syria once or twice, and seems to think he knows Syria better than this Syrian woman does.

5 Immigration Falsehoods from the White House

Congress gets back to its regularly scheduled work on Monday—and there’s plenty of immigration propaganda greeting them. The falsehoods from...