The events in Syria are heartbreaking. Over 100,000 people have died in the fighting between pro-Assad government forces and anti-regime rebel fighters. Terrorist group (and erstwhile Lebanese political party), Hezbollah, is supporting the Assad regime with supplies and soldiers. Terrorist group Al Qaeda has joined the fight on the rebel side and is actively using the Syrian Civil War as a recruiting tool to build their enrollment (we’ve witnessed increasing numbers of Syrian rebel groups swearing allegiance to al-Qaeda). Caught in between are millions of non-partisan innocent civilians who simply want to live, and both sides are making that task more and more difficult every day.

In Syria we have aligned ourselves with the rebels because Bashar al Assad is a monstrous dictator. There are plenty of great reasons to toss Assad out of power, and I would not mind seeing the man brought up on charges before his own people. However, what is the alternative? The alternative to Assad is a religious Islamic government that will be filled with hardline Islamic fascists who seek the end of Israel and her allies (like the USA). 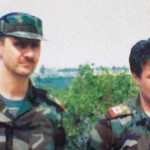 The same story has played out in Iran (in 1979), Lebanon, Tunisia, Libya, and Egypt. It’s trying to play out in Afghanistan (with the Taliban resurgence), Yemen, Mali, Iraq, and Pakistan. We are fools if we expect to “build democracy” in the Islamic World. To build democracy there means we are building theocratic Islamic nations! The people of the Islamic World are ardent Muslims… and they will elect a religious Islamic government… every time. We must understand that there is no building democracy in the Islamic World, there is only toppling dictators to create theocratic Islamic rule.

As disgusting as it sounds, we are better off with dictators in power in the Islamic world. Which is why we should stay away from the Middle East. We cannot whore out our values in support of dictators, and we cannot help topple them when it means putting ourselves in danger. We should immediately divorce ourselves from any idea of intervening in the Middle East, either militarily or politically.

Obamacare is an unworkable law. It’s obvious because the Administration keeps trying to “fix” it—to no avail. It has delayed...