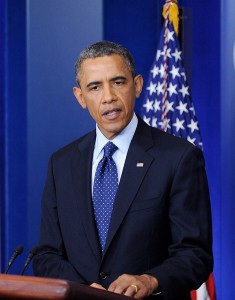 Sen. Barack Obama snatched the 2008 democratic nomination from Sen. Hillary Clinton for many reasons, none more important than Obama’s opposition to the Iraq War.

All of Obama’s major opponents — Sen. Chris Dodd, D-Conn., then-Sen. Joe Biden, D-Del., former Sen. John Edwards, D-N.C. and then-Sen. Clinton, D-N.Y. — had voted for authorization for war. Obama, then an Illinois state senator and a candidate for the U.S. Senate gave a speech in October 2002. He called it “a rash war… based not on reason but on passion, not on principle but on politics.” Sen. Obama pre-emptively criticized President George W. Bush in 2007 for possibly taking military action against Iran’s suspected nuclear sites — should he do so without congressional approval. Such an action, Obama said then, would be in violation of the Constitution unless the President obtained congressional approval.

Flash forward. March 2011. President Obama joins the French and British in bombing Libya during that country’s civil war. Libya had surrendered its weapons of mass destruction to the Bush administration in early 2004, fearing the same fate as the arrested and jailed Iraqi dictator Saddam Hussein. Obama describes the Libyan campaign as “humanitarian,” but also consistent with our “core interests.” He does not go to Congress.

Today, Obama supports military action against the Syrian government because it “crossed a red line” in its civil war by reportedly using chemicals to kill some 1,400 Syrians. Initially, Obama said he had authority to strike without Congress’ approval, and that he did not intend to seek their permission. Time was of the essence, he said. The use of chemicals, says Obama, violates “international norms” requiring intervention — and by the U.S. alone, says Obama, if necessary.

Then the British Parliament, for the first time since 1782, refused to give the prime minister authority for military action. Here, polls find Americans are overwhelmingly against military force in Syria. Obama abruptly announced that he would seek congressional approval — but said he retained the power to act and refused to say whether he’d do so should Congress vote no.

Where was Obama’s concern about chemical weapons during the 2002 debate on military action in Iraq? Obama opposed it despite Saddam’s assumed possession of WMD and his use of chemical weapons on the Iranians and his own people. Of the intelligence community’s assumption that Iraq possessed stockpiles of chemical and biological weapons — with the acquisition of nuclear weapons just a matter of time — Obama had no doubt:

“I suffer no illusions about Saddam Hussein.

He is a brutal man. A ruthless man. A man who butchers his own people to secure his own power. He has repeatedly defied U.N. resolutions, thwarted U.N. inspection teams, developed chemical and biological weapons, and coveted nuclear capacity. He’s a bad guy. The world, and the Iraqi people, would be better off without him.”

Obama opposed the Iraq War because “even a successful war against Iraq will require a U.S. occupation of undetermined length, at undetermined cost, with undetermined consequences.” Yet after 9/11, 90 percent of Americans expected a similar attack within 6 months to a year. Apart from using chemicals on his own people, Saddam was shooting at the British and American planes patrolling the “no-fly” areas protecting the Kurds and other ethnic groups; paying $25K to families of homicide bombers; stealing from the Oil-for-Food program; and was in violation of a number of U.N. resolutions to declare what he has done with his WMD and his nuclear program.

Still Obama called Iraq a “dumb war” orchestrated as “the cynical attempt by Richard Perle and Paul Wolfowitz and other armchair, weekend warriors in (the Bush) administration to shove their own ideological agendas down our throats.”

Obama also opposed the Iraq War for reasons that seem to apply to a Syrian intervention. “I know that an invasion of Iraq,” he said then, “without a clear rationale and without strong international support will only fan the flames of the Middle East, and encourage the worst, rather than best, impulses of the Arab world, and strengthen the recruitment arm of al-Qaida.” Wouldn’t striking Syria “fan the flames of the Middle East? And isn’t al-Qaida on the side of the “rebels” — the side we support?

Regime change in Syria, says Obama, is not the goal. Rather, the objective is a “shot across the bow,” designed to dissuade the Syrian government from further use of chemical weapons. U.S. credibility is on trial now that Obama foolishly talked about the “red line,” which, if crossed, would “change his calculus.”

But advisors and experts are, at best, uncertain about whether launching some missiles from an aircraft carrier will have any real effect in Syria. A symbolic strike, which appears to be the President’s intention, could be interpreted by our enemies as weakness. “But,” as then-Illinois State Sen. Barack Obama said on Iraq, “we ought not — we will not — travel down that hellish path blindly.”

One more thing — Syria is a client state. How about we cut to the chase and have the debate we should be having: Whether to go to war against Iran, the world’s leading exporter of terrorism?

In Case You Missed It:  WATCH: Ashli Babbitt’s Husband Appears on Tucker Carlson to Respond to MSNBC Interview With Her Killer
Posted in Terrorism, Tyranny and tagged Iraq, Obama, Syria, War, Weapons of Mass Destruction.

On Monday night Obama said to the world in an interview, that Saddam used chemical weapons against the Iranian people....