A website devoted to the archaeological dig at the Ophel site in Jerualem, which is sponsored by the Herbert W. Armstrong College, features a 17-minute video that describes in some detail the drama of the discovery of a golden 7th century treasure there. 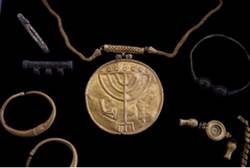 The medallion and other finds

Caridad French, an excavator at the site, describes finding a quarter-sized coin that was “very shiny,” and then finding another and another, together with another excavator, Ahinoam Meyers. “All of a sudden I start seeing what I thought was just another coin, but it was definitely bigger and it started growing more and more… Ahinoam and I are just wide eyed… I’m like, telling at them: ‘You have to come see it, it’s huge!’ – and they are just sitting there talking about other things, and I am yelling at them – ‘Come look at it! Come look at it!’… [Dr.] Eilat [Mazar] came over and kissed me on the head and told me: ‘In my entire life, I’ve never seen anything so beautiful.’”

The video features archaeologists Dr. Mazar and Peretz Reuven, who explain that the medallion was produced in a period when Jews had high hopes of the Jerusalem being rebuilt as a Jewish city, with the permission of the Persian rulers of Jerusalem.  However, the Jews’ dream of rebuilding a Jewish Jerusalem was never realized, because the Persians’ interests were not served by an alliance with the Jews, who were relatively few in number. The Jews found themselves once again persecuted, and the golden hoard had to be hurriedly hidden and left behind.

The medallion is very similar to another golden medallion that is housed in London’s Jewish Museum. Examination of the newly found medallion and comparison with the London medallion led the researchers to conclude that it was intended to decorate a Torah scroll, and may have been donated by a wealthy member of the local community.

“We don’t know of finds of medallions like these,” Dr. Mazar recalled the moment of discovery. “Even in the museum in London, where they do have gold medallions of this kind, they are much smaller.

“When we first found the cache, the initial thought was that we needed to treat it with great care, but the moment when my eyes fell upon the medallion with the seven branched menorah (candelabra), I was completely paralyzed.”

The video embedded below is a 2-minute-long item that includes very short segments from the footage that appears in the longer video. The longer video can be viewed at this link.

How to Libel Israel: A Case Study

September 11, 2013 13:30 by Simon Plosker It’s easy to produce an anti-Israel libel that is subsequently debunked after the...