Sound Familiar !!! The economy is Booming ? 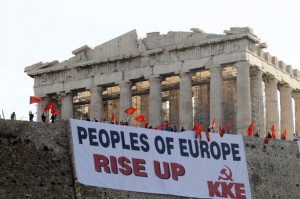 Europe could have another 25 million poor people by 2025 as the effects of austerity measures are felt across the continent, a leading poverty charity warned on Thursday.

This would bring the total number of people living in poverty across Europe to 146 million, almost a third of the population and it could take up to 25 years to regain the living standards people enjoyed five years ago, according to Oxfam. The charity criticized austerity measures that European countries have adopted, saying they have failed to succeed in shrinking government debt and have instead.

If left unchecked, austerity policies could put between 15 and 25 million more Europeans at risk of poverty by 2025 – nearing the population of the Netherlands and Austria combined. This would bring the number of people at risk of poverty in Europe up to 146 million, over a quarter of the population, warns international agency Oxfam as EU Finance Ministers meet in Vilnius tomorrow.

Oxfam’s new report, A Cautionary Tale, finds that austerity measures introduced to balance the books following the €4.5 trillion bank bail-out are instead causing more poverty and inequality that could last for the next two decades. 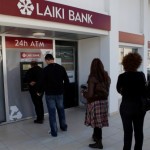 It could take Europeans up to 25 years to regain the living standards they enjoyed five years ago.

“The only people benefiting from austerity are the richest 10% of Europeans who alone have seen their wealth rise. Greece, Ireland, Italy, Portugal, Spain and the UK – countries that are most aggressively pursuing austerity measures – will soon rank amongst the most unequal in the world if their leaders don’t change course. For example, the gap between rich and poor in the UK and Spain could become the same as in South Sudan or Paraguay. 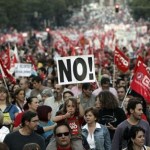 Our leaders are ignoring the profound pain that austerity cutbacks had for many years on people in Latin America, South East Asia and Africa in the 1980s and 90s. Their economies shattered and the poor continued getting poorer even when growth made a come-back. Basic services, such as education and health, were cut or privatized, excluding the poorest and hitting women hardest. As a result, the gap between rich and poor widened.

In Case You Missed It:  Get Ready for the Economic Collapse
Posted in Financial and tagged Europe, Financial, Recession, Socialism.